Caseys General Stores (NASDAQ:) has been working on a multi-pronged growth strategy for the last 18 months or so that is quickly becoming evident in the results. The company is not only acquiring new stores but expanding its core footprint as well as working to improve efficiencies in both inside and fuel sales at its growing chain of convenience stores. The recent price action in shares of Casey’s General Stores suggests a reversal in market sentiment that should be bolstered by the fiscal Q1 earnings report. If not, it may soon be possible to buy into this growth story at a lower valuation.

Casey’s General Stores reported $3.18 billion in for a gain of 50.7% over last year. The strength is notable for many reasons including the 21% gain versus 2019, the acceleration in YOY growth from the prior quarter, and the fact it outpaced the consensus estimate by 220 basis points. The gains are driven by the combined forces of acquisitions completed in the quarter, growth of fuel sales, and growth of inside sales and all cooped with wider margins. In terms of acquisitions, the company completed two during the quarter that added 137 new units.

In terms of sales, fuel gallons are up 24.7% sequentially and are coupled with a 630 basis point improvement in fuel margin. Inside sales came in slightly stronger at 25.2% sequentially and 8.0% over last year. Inside sales also saw an improvement in margin although a slightly smaller 90 basis point improvement that nevertheless helped drive solid results on the bottom line. On the bottom line, the Q1 GAAP earnings of $3.19 are down slightly from last year due to the cost of acquisitions and realignment efforts but beat the consensus by $0.27.

Looking forward, the company reaffirmed its guidance for comp sales in the mid-single digits for both gas and food but failed to offer an outlook on net sales. The analysts are projecting $11.4 billion in net sales for the fiscal 2022 period or a gain of 31% over last year. This outlook assumes slowing growth as the comps get tougher but at a rate far above the core 5% comp guided by management. Regardless, the company is projecting solid core growth on top of its acquisitions with both aided by widening margins.

Casey’s General Stores has a mildly high valuation at 25X this year’s earnings but that does not take into account expectations for growth over the next year to 24 months. That valuation is also supported by the company’s strong bordering on fortress-like balance sheet, its commitment to buy back shares, and the dividend. The company still has $300 million left under its current authorization and ample cash and cash flow to buy back shares at its discretion. The dividend yields about 0.7% which isn’t a high yield but it’s an incredibly safe yield. Marketbeat.com dividend data shows the payout ratio is in the mid-teens versus the consensus estimate and there is an expectation for distribution growth as well. The company has been increasing the distribution for 22 years with a 9% CAGR that puts it on track to make the next increase in the back half of the fiscal year.

The Technical Outlook: Casey’s General Stores Is At Support

Casey’s General Stores appears to be putting in a bottom following the decline in share prices seen in the wake of the previous earnings report. More recently, share prices fell nearly 2% the day before the release but appear to have found support at the short-term moving average. Assuming the moving average is able to maintain support and push the stock higher we see price action retesting the high near $208 very soon and then breaking out to new highs. 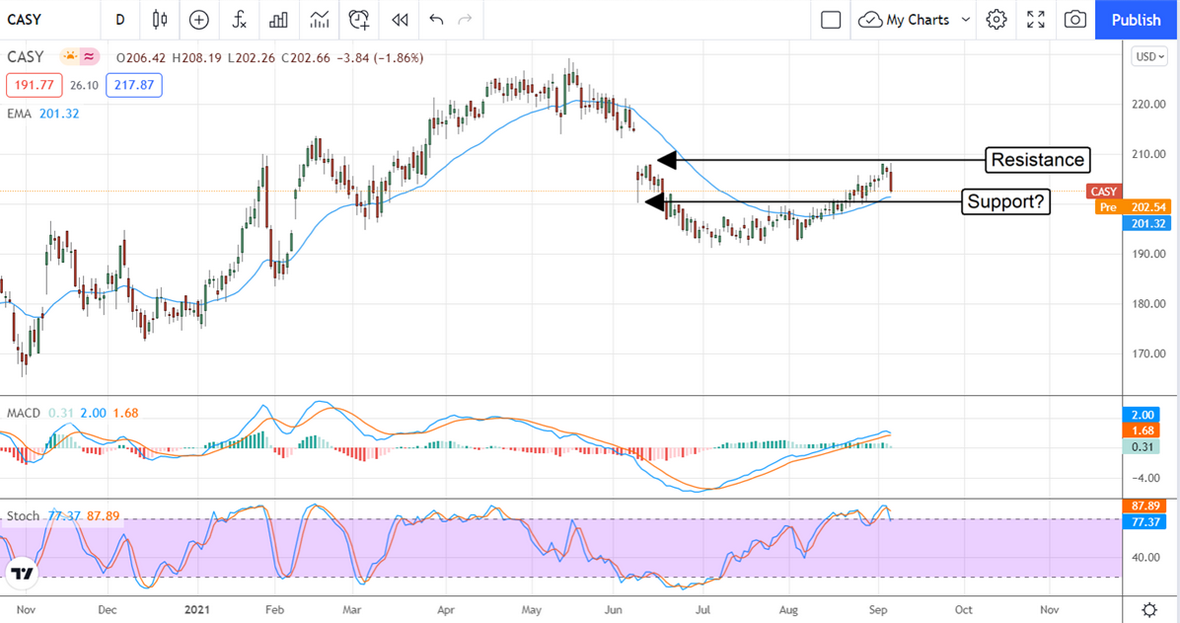