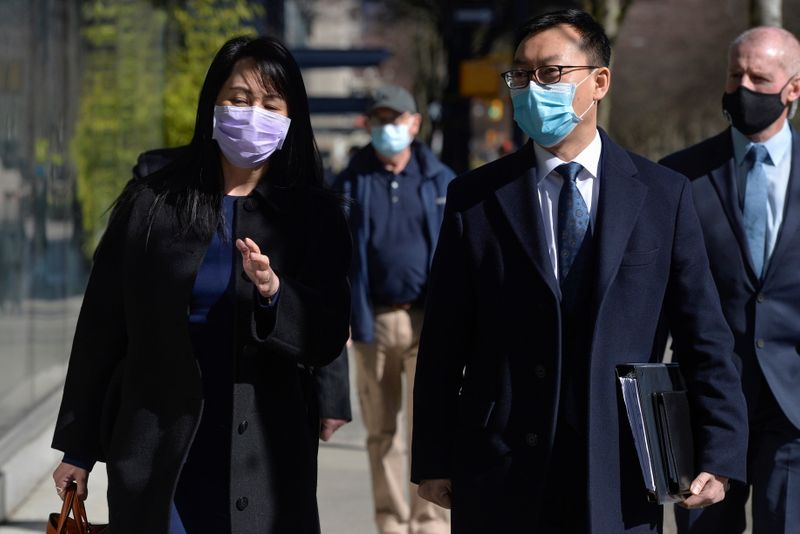 By Sarah Berman and Moira Warburton

VANCOUVER (Reuters) – The Canadian border agent who questioned Huawei Chief Financial Officer Meng Wanzhou before her arrest at Vancouver airport in 2018 went beyond the scope of his jurisdiction, in an effort to gather evidence for the FBI, Meng's legal team said on Friday.

Among the questions the agent asked was whether Huawei had an office in Iran, defence lawyer Mona Duckett told the judge, a line of questioning that she argued had nothing to do with immigration and her admissibility into Canada.

"It was an attempt to gather evidence for one audience," the Federal Bureau of Investigation, Duckett said as the hearing for Meng's extradition entered the last phase of arguments.

Meng, 49, is accused by the United States of misleading HSBC about Huawei Technologies Co Ltd’s business dealings in Iran, causing the bank to break U.S. sanctions.

The Canadian government has called the defence team's argument an unfounded "conspiracy," and stated that officials on both sides of the border followed due processes.

If extradited, Meng will face trial for bank fraud in the United States. Meng, who says she is innocent, is fighting her extradition from house arrest in Vancouver. Her legal team wants the case to be dismissed, arguing abuses of process took place during her arrest and her rights were violated.

Canadian border officials questioned Meng for three hours before the Canadian police arrested her on a U.S. warrant.

Meng's legal team allege Canadian and U.S. authorities coordinated to use the additional investigative powers of the Canadian Border Services Agency (CBSA) to question her without a lawyer present.

CBSA Superintendent Sanjit Dhillon, one of the officers who interrogated Meng, testified in November 2020 that the Canadian police did not give him any instructions about what to ask Meng, however.

Another CBSA officer who was involved testified last year that border officials were concerned about keeping their investigation separate from the police's extradition arrest.

On Friday, Duckett was skeptical about what she called Dhillon's "excuse" for bringing up Iran, which was that he read a Wikipedia article about Huawei which mentioned that country.

Meng's defence has accused several police and border witnesses of "untruthful” testimony in their submissions about alleged abuses of process.

Meng's arrest has caused a breakdown in diplomatic relations between Ottawa and Beijing. Shortly after she was detained, China arrested Canadians Michael Spavor and Michael Kovrig on espionage charges. Spavor faced trial on Friday; Kovrig's trial is set for Monday.

Meng's case is expected to wrap up in May, although a decision could be appealed, which would delay the final outcome.