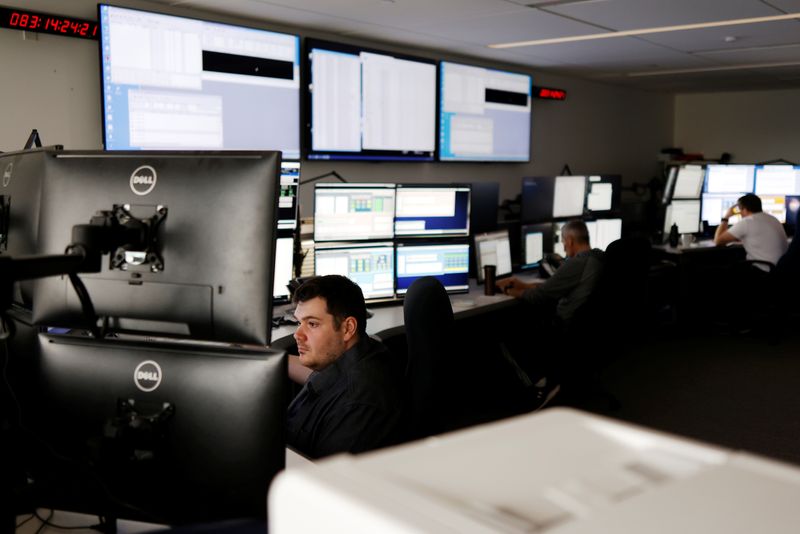 © Reuters. Satellite controller Sean Sauve works at the offices of Telesat in Ottawa

Musk, the Tesla (NASDAQ:) Inc CEO who was only a year old when Telesat launched its first satellite, is putting the so-called Starlink LEO into orbit with his company SpaceX, and Amazon.com Inc (NASDAQ:), which Bezos founded, is planning a LEO called Project Kuiper. Bezos also owns Blue Origin, which builds rockets.

Telesat’s LEO has a much lighter price tag than SpaceX and Amazon’s, and the company has been in satellite services decades longer. In addition, instead of focusing on the consumer market like SpaceX and Amazon, Telesat seeks deep-pocketed business clients.

Goldberg said he was literally losing sleep six years ago when he realized the company’s business model was in peril as Netflix (NASDAQ:) and video streaming took off and fiber optics guaranteed lightning-fast internet connectivity.

Telesat’s 15 geostationary (GEO) satellites provide services mainly to TV broadcasters, internet service providers and government networks, all of whom were growing increasingly worried about the latency, or time delay, of bouncing signals off orbiters more than 35,000 km (22,200 miles) above earth.

Then in 2015 on a flight home from a Paris industry conference where latency was a constant theme, Goldberg wrote down his initial ideas for a LEO constellation on an Air Canada napkin.

Those ideas eventually led to Telesat’s LEO constellation, dubbed Lightspeed, which will orbit about 35 times closer to earth than GEO satellites, and will provide internet connectivity at a speed akin to fiber optics.

Telesat’s first launch is planned in early 2023, while there are already some 1,200 of Musk’s Starlink satellites in orbit.

“Starlink is going to be in service much sooner … and that gives SpaceX the opportunity to win customers,” said Caleb Henry, a senior analyst at Quilty Analytics.

Starlink’s “first mover” advantage is at most 24 months and “no one’s going to lock this whole market up in that amount of time,” Goldberg said.

They are Japan’s Mitsubishi Heavy Industries Ltd, Europe’s ArianeGroup , and Musk’s SpaceX, which launches the Starlink satellites. Wendling said a decision would be taken in a matter of months.

Telesat aims to launch its first batch of 298 satellites being built by Thales Alenia Space in early 2023, with partial service in higher latitudes later that same year, and full global service in 2024.

The Lightspeed constellation is estimated to cost half as much as the $10 billion SpaceX and Amazon projects.

“We think we’re in the sweet spot,” Goldberg said. “When we look at some of these other constellations, we don’t get it.”

Analyst Henry said Telesat’s focus on business clients is the right one.

“You have two heavyweight players, SpaceX and Amazon, that are already pledging to spend $10 billion on satellite constellations optimized for the consumer market,” he said. “If Telesat can spend half that amount creating a high-performance system for businesses, then yeah, they stand to be very competitive.”

“We’ve worked with many of these customers for decades … That’s going to give us a real advantage,” Goldberg said.

Telesat “is a satellite operator, has been a satellite operator, and has both the advantage of expertise and experience in that business,” said Carissa Christensen, chief executive officer of the research firm BryceTech, adding, however, that she sees only two to three LEO constellations surviving.

Telesat is nailing down financing – one-third equity and two-thirds debt – and will become publicly traded on the Nasdaq sometime this summer, and it could also list on the Toronto exchange after that. Currently, Canada’s Public Sector Pension Investment Board and Loral Space & Communications Inc are the company’s main shareholders.

France and Canada’s export credit agencies, BPI and EDC respectively, are expected to be the main lenders, Goldberg said. Quebec’s provincial government is lending C$400 million ($317 million), and Canada’s federal government has promised C$600 million to be a preferred customer. The company also posted C$246 million in net income in 2020.

Executing the LEO plan is what keeps Goldberg up at night now, he said.

“When we decided to go down this path, the two richest people in the universe weren’t focused on their own LEO constellations.”