Reynolds Consumer Products (NASDAQ:REYN) is no newcomer to the game of consumer retail despite its short history as a publicly-traded company. The business is a well-established blue-chip brand in American households and businesses with no danger of disappearing. Looking at the company and the stock from the investment perspective, it is an attractive play on the sector. Compared to its cousins within the consumer staples sector, it trades at a relatively deep discount, pays an above-average yield, and has tailwinds to support its long-term growth objectives.

Reynold’s Consumer Products had a good quarter but not a great one. The $861 million in net revenue is up 7.6% from last year and 200 basis points better than expected but rising costs cut into the bottom line. Despite the headwinds, the company was able to report record revenue and profits for the quarter and it looks set to produce another year of records in 2021. On a segment basis, the Hefty brand led with an increase of 15% with smaller 8%, 4%, and 2% increases for cookware, tableware, and the Presto line.

Moving down to the bottom line, the strength in revenue was offset by rising costs that resulted in margin shrinkage but not enough to impact adjusted earnings growth. The adjusted earnings of $0.57 are up from last year’s $0.53 and beat by a penny. The GAAP EPS of $0.53 is another story. GAAP earnings shrank slightly on a YoY basis and missed the consensus by a penny. As for guidance, the company is forecasting more of the same in 2021. The outlook for revenue growth is in the low to the mid-single-digit range but offset by an expectation for flat EPS.

“We expect to build on last year’s performance with another year of record net revenues. We will continue to grow with our categories due to a sustained and fundamental shift in consumer demand coupled with our innovations and best in class service. Our role as category champions aligns us with our retailers, who are also invested in continued growth. We expect 2021 to be another dynamic year, and I look forward to a second consecutive year of strong performance as a public company,” said Lance Mitchell, President and Chief Executive Officer.

Reynold’s Is A Dividend-Grower And A Value

Reynold’s company is not without risk and the debt is one to be aware of. The company is carrying about $2.1 billion in debt on the balance sheet but working hard to pay it down. Over the past year, the company has used its cash flow to make $300 million in voluntary, early debt repayments in an effort to strengthen the balance sheet and free up more cash flow and continue paying down the debt. The company is still highly levered but coverage is at least adequate and the outlook for cash flow and further improvement is positive.

As for the dividend, the stock is yielding about 3.0% with shares trading near $28.80 and that includes a 5% distribution increase. At this level, the company is paying about 44% of its earnings and could sustain another one next year.

In terms of its value, Reynolds Consumer Products is trading about 15X this year’s and 14X next year’s earrings consensus which makes it a value compared to the broader market and its peers. Leaders in the consumer staples group are trading in the 25X to 30X earnings range while the S&P 500 are closer to 22X forward earnings and neither group yields above 2.5%.

The Technical Outlook: Reynolds Is At An Inflection Point

Shares of Reynolds Consumer Products fell in the wake of the Q4 release and may move lower. The caveat is that price action is still above the mid-point of the post-IPO range where support has stepped in before. It would not be unwise for investors to expect a test of support at the $28 level but it might be a mistake to expect a break of that support. If price action breaks below $28 and then confirms resistance and reversal we’d get bearish. Until then it looks like a buying opportunity could develop when support is tested. 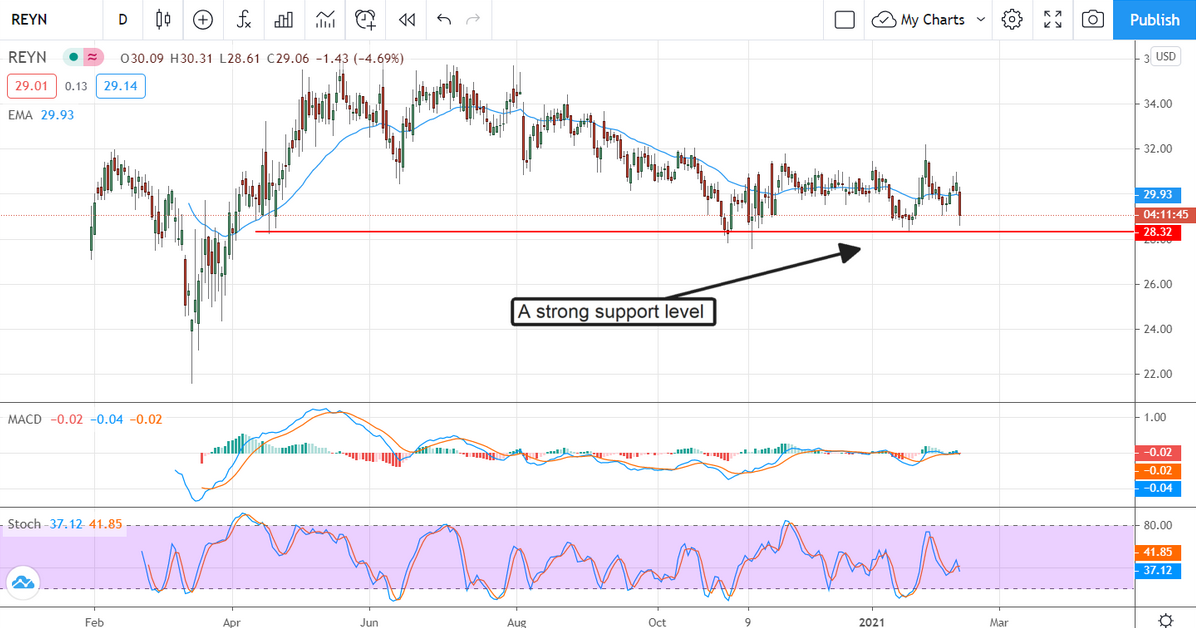