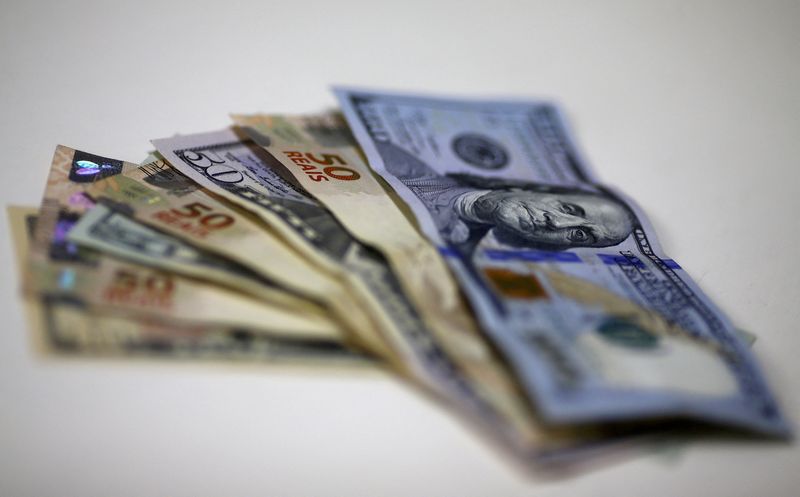 BUENOS AIRES (Reuters) – Brazil’s real is set for a bumpy ride ahead of the country’s election runoff later this month, as political tensions simmer following a surprisingly good performance by President Jair Bolsonaro in the first round, a Reuters poll showed.

The currency has rallied 4.2% this week to 5.19 per U.S. dollar on Wednesday on Bolsonaro’s better-than-expected results on Sunday, despite his leftist rival Luiz Inacio Lula da Silva winning more votes.

However, according to the median estimate of 21 economists polled Oct. 3-5, the currency is forecast to trade 2% weaker at 5.30 per U.S. dollar on Oct. 31, when domestic markets react to the runoff scheduled for the last Sunday of this month.

“Brazil’s real will likely remain volatile until the election, but after the dust settles it should extend its recent uptrend, supported by the peak in U.S. yields,” said Edward Moya, senior markets analyst, the Americas at Oanda.

Bolsonaro and Lula are heading for four more weeks of intense campaigning in Brazil’s most fraught election since the end of military rule in 1985, following allegations by the president the voting system cannot be trusted.

This week, both were hunting endorsements in a race proving more competitive than previously thought. In the first round, Lula won 48.4% of the votes, a relatively small lead over Bolsonaro’s unexpected result of 43.2%.

The currency should remain supported by wide arbitrage differentials given an incipient decline in U.S. Treasury note yields, on one side, and expectations of persistently higher ones for Brazilian bonds on the other hand.

Contrary to its turbulent regional neighbors, the Mexican peso is already looking at another year of stability in 2023, with estimates for the currency’s value firmly set at around 20.00 per U.S. dollar in the coming 12 months.

It would be the sixth year in a row, except for a bout of sharp oscillations at the height of the coronavirus pandemic in 2020, that the peso has traded within a well defined range of 18.00-22.00 per U.S. dollar.