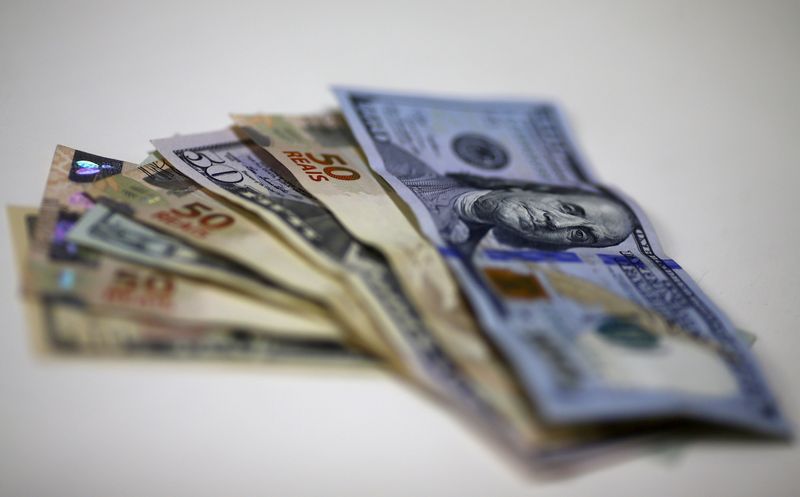 BUENOS AIRES (Reuters) – Brazil’s real is starting the second-quarter in a somber mood as the coronavirus pandemic continues to wreak havoc in Latin America’s biggest economy and as pressure builds on the government, a Reuters poll showed.

The Brazilian currency lost around 10% in the first three months of the year, briefly revisiting its record closing low of 5.88 per U.S. dollar set last year. That mark could be easily breached soon.

Thousands of Brazilians are dying daily of COVID-19, the economy is struggling and opposition to President Jair Bolsonaro has increased. Under attack from all sides, he has reacted by appointing loyalists in key positions.

“Domestic risks are for BRL downside: the resurgence of COVID-19, potential for further fiscal pressures should the pandemic deteriorate and last for longer, and political uncertainty,” said Juan Prada (OTC:), an FX strategist at Barclays (LON:).

The real is seen at 5.31 per U.S. dollar in 12 months, according to 27 analysts polled March 26-30. The estimate represents an expected 8.4% gain from Wednesday but a big 3.9% drop from last month’s survey, presaging more tension ahead.

Out of 11 respondents who answered a separate question about the currency’s trajectory over the coming year, a majority of 6 said the trend was for a weaker real, four viewed it on a stronger footing and 1 neutral.

The unit will probably remain soft even after a steep interest rate hike last month that started a policy tightening cycle. The country’s central bank head said later the overall adjustment may not be so aggressive.

Besides the high toll in lives from the raging health crisis and its impact on governability, economists worry Bolsonaro’s drive to tighten the purse strings could run aground amid increasing social demands before next year’s election.

Brazil’s Treasury has warned the 2021 budget approved by Congress threatens one of the government’s key pillars of fiscal stability and urged the estimates for mandatory spending be brought up to a more “realistic” level.

In Mexico, the peso is likely to appreciate 1% in one year to 20.32 per U.S. dollar. However, the 12-month outlook for the currency also worsened significantly from March’s poll, as investors remain nervous.

Like Brazil, the country is suffering a severe fresh wave of coronavirus cases. Its death toll is likely at least 60% higher than the confirmed number, putting it in excess of 300,000, according to government data.

(Reporting and polling by Gabriel Burin in Buenos Aires; Additional polling by Manjul Paul and Mumal Rathore in Bengaluru; Editing by Bernadette Baum)