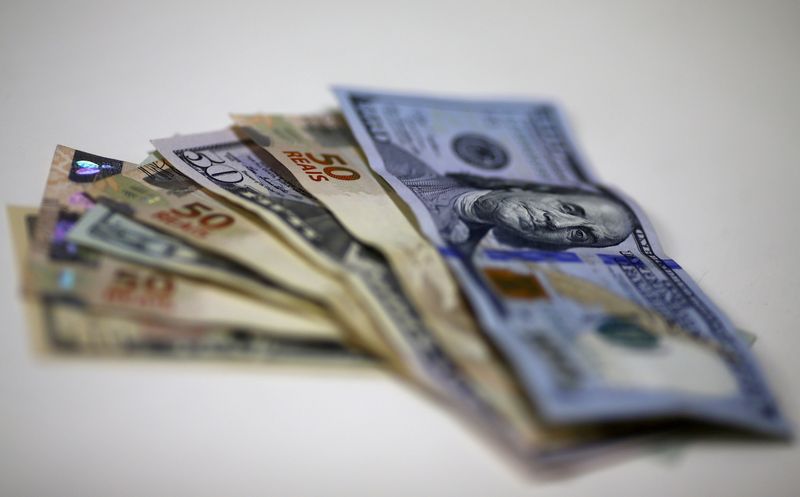 By Gabriel Burin and Tushar Goenka

BUENOS AIRES/BENGALURU (Reuters) – Brazil’s real will continue to get some aid this year from solid trade surpluses and further interest rate hikes that should help avoid bigger losses for the currency as domestic tensions intensify, a Reuters poll showed.

The real has been rangebound, trading 4.90-5.40 against the U.S. dollar for roughly three months, while Brazil benefits from an export boom fueled by China’s recovering demand and a weak exchange rate after the coronavirus-related hit of 2020.

A strong current account result has become the economy’s brightest spot, driving hard currency into Brazil at a time when some investors who are too worried about local politics keep selling the real, pushing it downwards.

In the short term, it is likely to settle near the mid-point of its recent interval, close to 5.15, not far off where it is trading now, according to median estimates of 22 strategists in a poll taken Aug. 31-Sept. 2.

Brazil posted a $7.7 billion trade surplus in August, keeping a stellar performance of record monthly levels due to a steady flow of high-volume sales of key commodities like soybeans and iron ore.

Also favoring the local currency, the central bank is expected to hike its rate further to 7.0% by the end of 2021, according to a separate Reuters poll, closing the year with a staggering increase of 500 basis points, cumulatively.

Still, the real was projected to depreciate 4.0%, from Thursday’s levels of 5.18, to change hands at 5.40 against the greenback in 12 months, when Brazil will be going through the final leg of the campaign for next year’s presidential vote.

Reuters poll graphic on the outlook for and : https://tmsnrt.rs/3kQKV3a

In Mexico, the peso will follow a softer trend into next year after months of unremarkable trading performance. It is expected to trade at 20.45 per U.S. dollar in 12 months, shedding around 2.3% from this week’s trading levels.

The main concern is how stimulus tapering will pan out in the United States. “The peso will tend to weaken as expectations of a more restrictive stance by the U.S. Federal Reserve increase,” said Ricardo Aguilar, chief economist at Invex.

(For other stories from the September Reuters foreign exchange poll:)