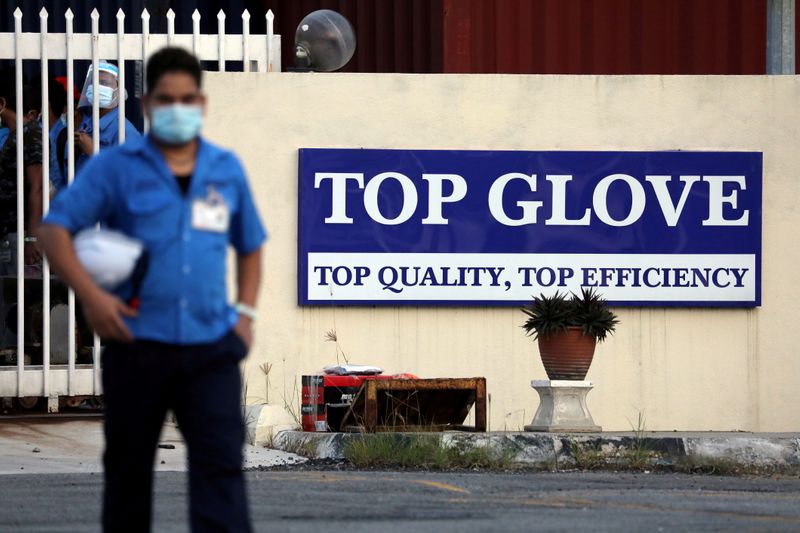 © Reuters. FILE PHOTO: A worker leaves a Top Glove factory after his shift in Klang

KUALA LUMPUR (Reuters) – The board of directors of Malaysian firm Top Glove Corp, the world's largest maker of medical grade gloves, has failed egregiously in protecting its workers from COVID-19, U.S. investor BlackRock (NYSE:BLK) said, calling for its removal.

The comments from the world's biggest asset manager come after Top Glove saw an extensive coronavirus outbreak among its workers late last year. More than 5,000 foreign workers were infected and one died in what became Malaysia's biggest cluster.

Reuters reported last month that Top Glove fired a whistleblower who raised concern about the firm's lack of COVID-19 mitigation efforts. Workers have also told Reuters that they lived in crowded dormitories.

BlackRock cited workers' accounts of working and living conditions, the firing of the whistleblower and the virus cluster at Top Glove in its criticism of the board. It also voted against re-electing six board members at Top Glove's annual general meeting on Wednesday.

"We view the board's ineffectiveness in COVID-19 mitigation and inadequate oversight of worker health and safety issues as especially egregious with potentially serious implications for its reputation as a supplier of such equipment to hospitals around the world," BlackRock said in a statement late on Wednesday.

Top Glove did not immediately respond to a request for comment. The company has acknowledged that much more needs to be done to raise the standard of employee welfare and has promised to rectify shortcomings quickly.

A BlackRock unit, BlackRock Institutional Trust Co, is the tenth biggest shareholder in Top Glove, holding 1.07% of its shares.

The U.S. firm said it intended to hold other incumbent directors accountable by voting against their re-election at future meetings.

An influential Norwegian sovereign wealth fund, managed by Norges Bank Investment Management (NBIM), also voted against their re-election, according to voting records published by NBIM on its website.

The fund, which owns 0.84% of Top Glove shares, declined to comment on worker safety concerns.

The board members were re-elected despite the objections.

BlackRock's comments were the first public criticism of Top Glove from an investor since the virus outbreak among workers.

The company posted record profits last year as demand for its gloves soared due to the pandemic. Its share price more than tripled in 2020.

BlackRock said the living conditions described by the workers, U.S. and Malaysian authorities were in "stark contrast" to what the board conveyed to shareholders.

Top Glove's factories, some of which were closed due to the virus outbreak, reopened last month.