is still consolidating Monday’s sharp gains. Yet, it seems that eking out further gains is getting harder as the price action took the index quite far from its key moving averages. If I had to pick one sign of stiffer headwinds ahead, it would be the tech sector’s reaction to another daily retreat in Treasury yields. The sector didn’t rally, and neither did the . Value stocks saved the day, and it appears we’re about to see them start doing better again, relatively speaking.

Yes, the risk-reward ratio for the bulls is at unsavory levels in the short run. What about being short at this moment then? It all depends upon the trading style, risk tolerance and time horizon. I’m not looking for stocks making a major top here as the bull run is intact.

My prognosis for yesterday’s session materialized, and we have seen quite a record number (around 95%) of stocks trading above their 200-day moving averages, which is similar to the setup right after the post-dotcom bubble bear market 2002/3 lows, or 1-2 years after the bull market run off the March 2009 lows. Hard to say which one is more hated, but I see the run from March 2020 generational low as the gold medal winner, especially given the denial accompanying it since.

made a run above $1,740 in line with retreating yields and not giving up much gained ground, but the immediate run‘s continuation to the key $1,760s or even better above $1,775 looks set to have to wait for a few sessions. I don’t expect today’s FOMC minutes release to change that. While the metals are likely to take their time, the healthy miners’ outperformance supports its continuation once the soft patch we appear entering, is over.

The dollar downswing is playing out, putting a floor below the commodities, which are undergoing a much needed correction from their late February top. It’s not over yet, and the shy upswing is but one clue. Given the meandering around $60 (by the way, not even the unlikely decline to $52 would break black gold’s bull run), the performance as of late is disappointing, as the greenback got mostly stronger since mid March. More patience in the commodities arena appears probable as we’re waiting for both Treasury yields and inflation expectations to start rising again. 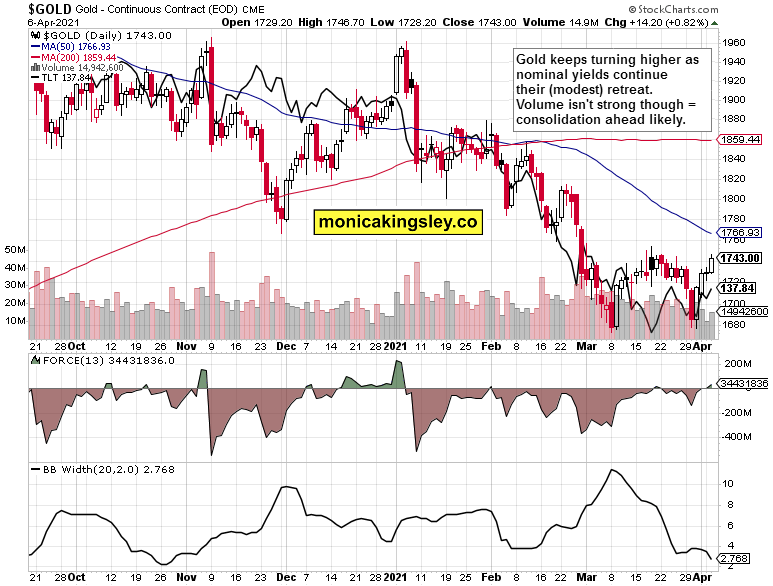 Gold‘s Force index finally crossed into positive territory, but the yellow metal isn’t taking yet advantage of retreating yields in a visually outstanding way. Quite some resistance in the $1,740s needs to be cleared first, which would likely take a while, but the rally’s internals are still on the bulls’ side.

Gold miners keep strongly outperforming the yellow metal, with the seniors (GDX (NYSE:) ETF) doing particularly great – better than gold juniors or silver miners. Seeing signs of the silver sector getting too ahead, wouldn‘t likely be bullish at all unless sustained – at the current stage, I can‘t underline these words enough in the ongoing physical silver squeeze. 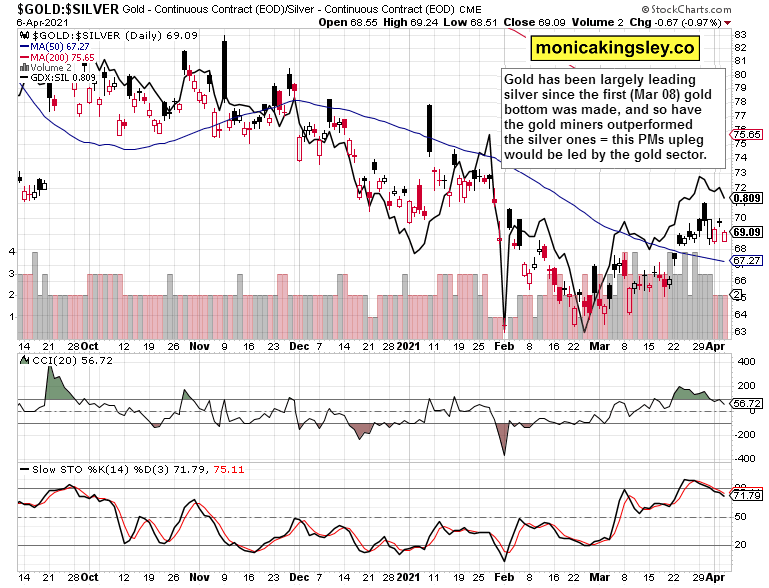 Since the gold bottom was hit in early March (that’s still the leading hypothesis), the precious metals’ leadership has moved to the yellow metal – and it’s visible in both the gold-to-silver ratio and gold miners to silver miners one. The time for the white metal to (out)shine would come, but clearly isn’t and won’t be here any day now.

Precious metals are likely to run into short-term headwinds before clearing out the next major set of resistances above $1,760s. The upswing though remains healthy and progressing, and will be led by the gold sector.

S&P 500 is likely to keep consolidating gained ground, and (shallow) bear raids wouldn’‘t be unexpected here – in spite of solid corporate credit markets performance. Yet, it’s the extraordinary nature of trading and put/call ratio moves, that point to the bull market run as intact and merely in need of a breather.