One of the marquee events on any tech geek’s calendar is Apple’s Worldwide Developers Conference (WWDC). But, with Apple’s (NASDAQ:) market capitalization rising above $2T, making it the most highly-valued company on the planet, it’s been an increasingly important gathering for investors to monitor as well.

See the key facts, themes, and implications for AAPL stock below:

WWDC is a week-long (virtual) gathering of Apple developers where the iPhone maker has historically announced new versions of its software and hardware products.

WWDC will take place throughout the week, but the highly-anticipated keynote speech is scheduled for Monday, June 7 at 1:00pm ET.

What To Expect From Apple’s WWDC 2021

Speculation about new products and operating systems is rampant, with rumors of new operating systems (prominently including iOS 15), a new line of MacBook Pros, details about the upcoming iPhone 13, and even a potential AR/VR headset among the most prominent areas to watch.

There’s an entire industry of tech “insiders” reading the proverbial tea leaves of company press releases and job openings to speculate on new products, so we don’t have much unique insight to add there. However, after weeks and months of speculation about new hardware, investors are clearly pricing in a chance of a new product release, so if there are no new announcements on that front, AAPL stock may see a kneejerk reaction lower on Monday.

The longer-term theme to watch will be Apple’s transition from using Intel’s CPUs to Apple’s own custom-designed silicon chips. The company is halfway through a 2-year roadmap for the transition, so any hints that transition may be running ahead of schedule could be a bullish factor for the stock.

Turning our attention to the AAPL chart, it’s clear that the world’s largest company has lost its post-COVID bullish momentum. Over the last six months, the stock has essentially been constrained to a sideways range between $120 and $138, with only short-lived forays beyond that range.

That said, the prolonged consolidation has allowed the 200-day exponential moving average time to “catch up” with price, and prices appear to be finding support at a rising trend line off the July 31 lows, so bulls have some reason for optimism moving forward, especially if the WWDC announcements are well-received. 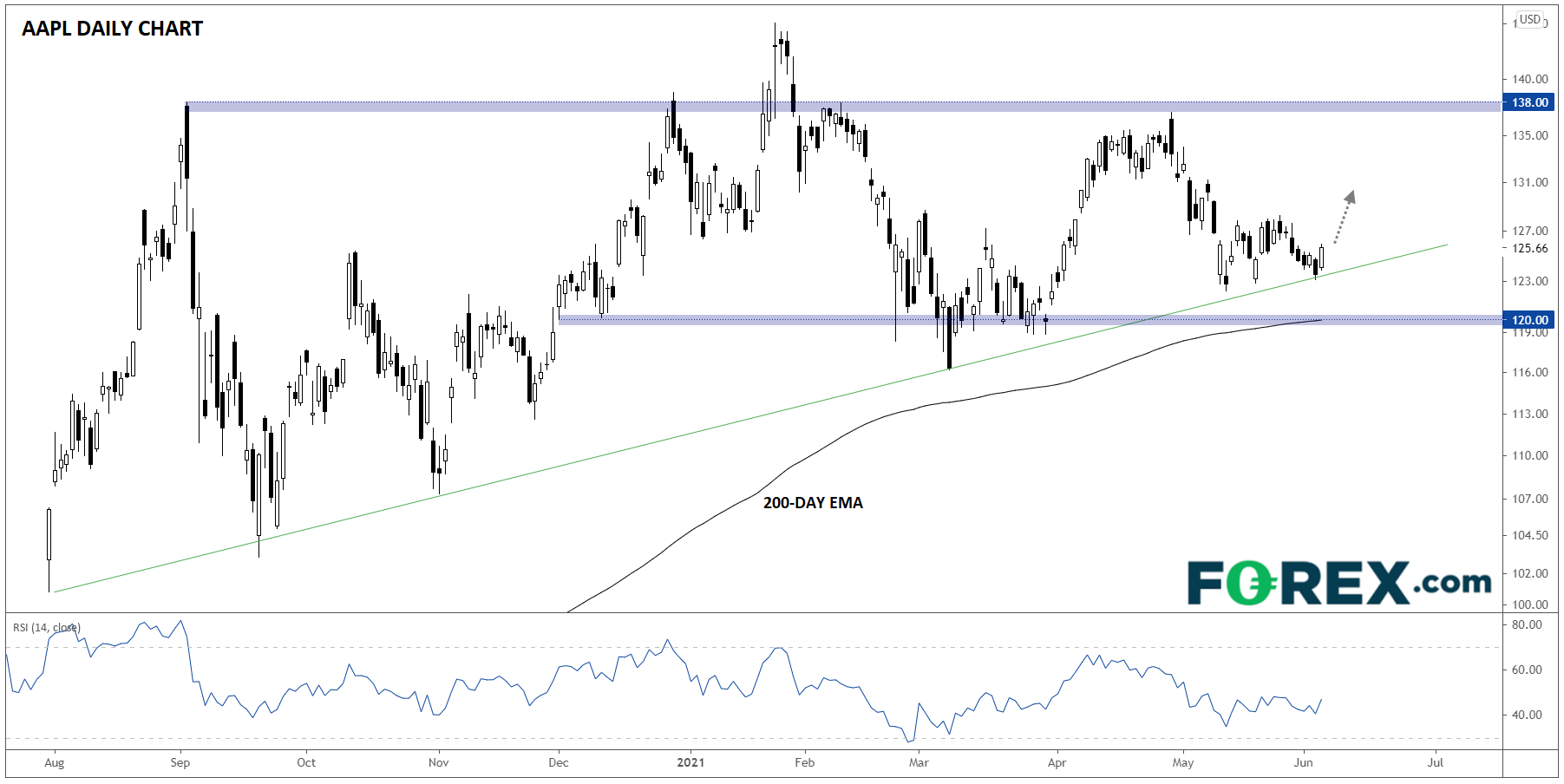 As long as the stock holds above its trend line, bulls will favor a rally toward the top of the range in the upper-$130s. On the other hand, a disappointing WWDC could break that trend line and expose the 200-day EMA and bottom of the year-to-date range near $120.00 next.

The first and only...

LKQ Stock On The Verge Of Doubling Yet...