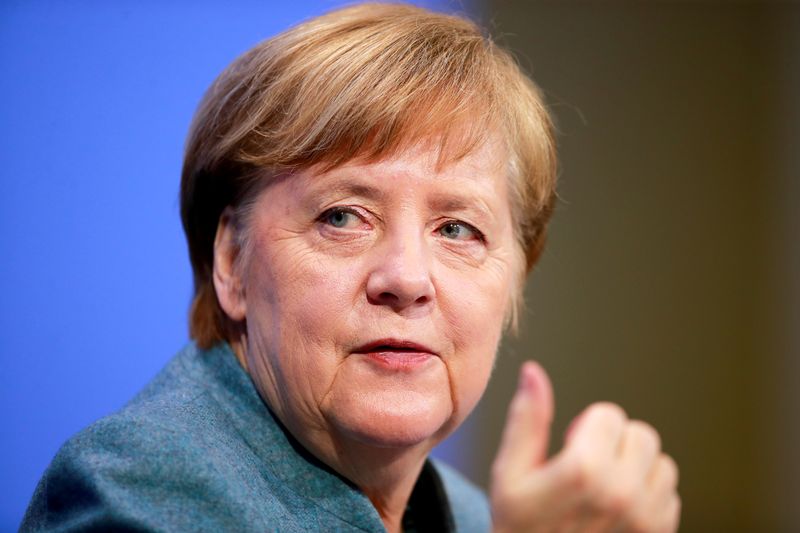 By Tom Sims and Patricia Uhlig

FRANKFURT (Reuters) – Angela Merkel will give a welcome speech at Deutsche Bank (DE:DBKGn)'s annual New Year reception on Thursday, marking a rare appearance by the German chancellor at an event by a bank that for years has been battling losses and scandals.

Merkel will be speaking just a week after the lender reported its first annual profit since 2014, an important milestone in CEO Christian Sewing's efforts to revive Deutsche's fortunes.

But investors and analysts said that despite Merkel's symbolic vote of confidence, the bank's prospects remain uncertain.

They applaud Sewing for cutting costs but question the bank's ability to generate income after revenue in all its core businesses fell last year apart from the investment bank.

Thanks to a pandemic-sparked trading boom, Deutsche managed to make lemonade out of lemons last year, said Alexandra Annecke, portfolio manager at Union Investment, a shareholder in the bank. "The bank is still on thin ice."

Deutsche, which is in the midst of a major overhaul, is forecast to make 1.6 billion euros less in revenue in 2022 than in 2020, a drop of 6%, based on a consensus forecast of analysts.

All divisions are expected to generate roughly the same or less over that period, with the exception of asset management.

"We have to ask Christian Sewing where he wants to earn his money in the next three to five years," Klaus Nieding of the shareholder lobby group DSW said. "The bank needs more fields where they can earn the money they need."

Deutsche has some ideas in the pipeline. The private bank division that focuses on retail customers, with its 22 million clients, hopes to broaden the number of customers that are charged fees for deposits, bankers at the unit have said.

The asset management division is seeking to grow in Asia, while the corporate bank wants to expand in the area of merchant payments.

"It's actually crucial … to revitalise the corporate banking franchise in those areas where they so far lack presence," said Michael Rohr, analyst with Moody's (NYSE:MCO), one of the ratings agencies that has become more confident in the bank's outlook.

Increasing profitability in the other areas is important to diversify the bank's revenue streams, Ioana Sima, a director at Fitch, said.

"If the investment bank has a bad year, which it may have, then these other businesses are able to carry it," Sima said.

Sewing has said the investment bank should contribute only 30% of core revenues. In 2020, it accounted for close to 40%.

Low interest rates and fierce competition have depressed profits for banks across Europe, which is why Sewing, who took the helm in 2018 to turn the bank around, has largely focused on costs. He is cutting 18,000 jobs and has closed some businesses.

Merkel has largely kept her distance from the country's banking industry since the 2008 financial crisis triggered unpopular taxpayer-financed bailouts.

This year, Merkel's office said she was delighted to accept Sewing's invitation to Thursday's reception, which will be virtual.

"In view of the 150-year history of Germany's largest bank, and the importance of the German banking industry in the current challenging situation, an appreciative tribute is only natural," her office said.

Privately, bankers have grumbled that Germany's politicians are loath to support the industry as they would other sectors, like cars.

As well as financial troubles, Deutsche has had to cope with a series of scandals and costly regulatory failings, including over money laundering.

In his efforts to turn the page on this era, Sewing has bolstered the bank's compliance operations. He has urged employees to reclaim their "hunter mentality" and has preached ruthless cost control.

But it is too early to judge whether he has succeeded in turning the bank around.

"The jury is still out," said Giles Edwards, analyst with S&P.