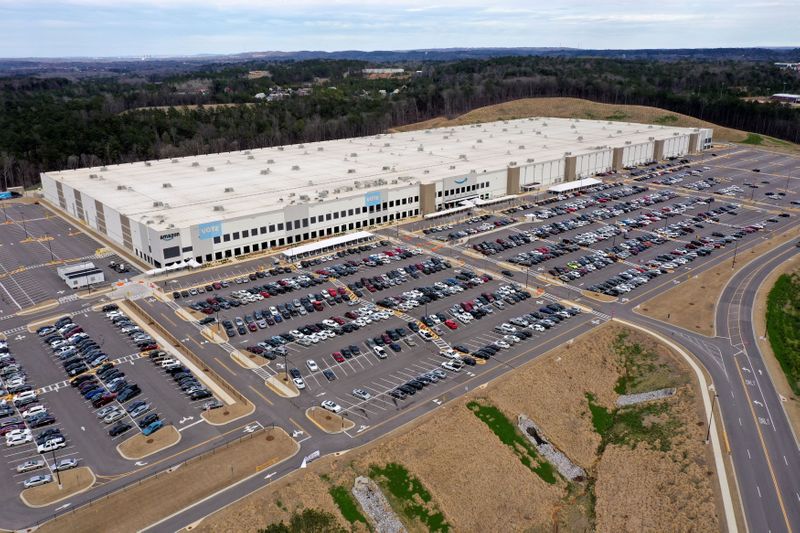 By Jeffrey Dastin and Mike Spector

(Reuters) -Amazon.com Inc’s fierce resistance to unionization, skepticism among workers that organizing could get them a better deal and decisions on election parameters all contributed to the apparently lopsided defeat of a labor drive at the company’s warehouse in Bessemer, Alabama, people close to the events said.

A vote by workers on whether to unionize failed on Friday by a more than 2-to-1 margin in a major win for the world’s largest online retailer. The union plans to challenge the results based on Amazon (NASDAQ:)’s conduct during the election.

Union leaders had hoped the campaign just outside Birmingham would create Amazon’s first organized workplace in the country and spark a new era of worker activism. Instead, it has illustrated the continued challenges facing the labor movement.

Officials at the Retail, Wholesale and Department Store Union (RWDSU) argued that Amazon’s unfair tactics were to blame in an election where only just over half of eligible workers cast ballots.

In a statement, the RWDSU said, “The results of the election should be set aside because conduct by the employer created an atmosphere of confusion, coercion and/or fear of reprisals and thus interfered with the employees’ freedom of choice.”

Amazon in a blog post denied the outcome resulted from intimidation of its employees.

“We’ve always worked hard to listen to them, take their feedback, make continuous improvements, and invest heavily to offer great pay and benefits in a safe and inclusive workplace,” it said.

The e-commerce company campaigned for weeks, plastering the warehouse and even a bathroom stall with anti-union notices, stopping work for mandatory employee meetings on the election, and bombarding staff with text messages criticizing the RWDSU.

In one of the messages seen by Reuters, warehouse leadership warned that collective bargaining could result in workers losing benefits – something the union has disputed. “Everything is on the table,” the text declared.

And in one of the mandatory meetings, presentations asserted union leaders used membership dues for improper purposes such as expensive cars and vacations, a former employee at the company’s warehouse told Reuters. The union did not immediately comment on the claim.

But some warehouse workers pointed to shortcomings in the union drive. Many younger workers, lacking experience with unions and knowledge of labor history, were never persuaded of the benefits of organizing, these people said. Some cited Amazon’s above-average wages, and better working conditions overall than other local employers.

Denean Plott, 56, who picked customer orders at the warehouse until March and voted for the union, said, “It is a good paying job. They do have wonderful benefits.” And young employees “don’t feel they need a union because they’re not putting health and safety at risk as much.”

Some cited fear that voting for a union would mean a constant battle with management they would rather avoid.

A group of warehouse dock employees who do heavy lifting were against the unionization effort and appreciated Amazon’s current benefits, which include receiving health insurance upon hiring, according to one of the former fulfillment center employees. These dock workers also held skeptical views of unions generally, associating them with corruption, the former employee said.

Union leaders had hoped the election would fuel a revival of worker activism, at a time when only 6.3% of private sector workers belonged to unions in 2020, according to U.S. Labor Department statistics. Private sector union membership declined by 428,000 in 2020 from the year before.

High-profile union organizing drives have failed at factories in the South run by Nissan (OTC:) Motor Co and Volkswagen AG (OTC:), and aircraft maker Boeing (NYSE:) Co. In each of those cases, as at Amazon, union leaders bet that workers unhappy with wages and working conditions would jump at the chance to have a union go toe-to-toe with management. In each case, the unions were wrong.

The retail workers’ union also struggled in Bessemer with some of the challenges that carmakers previously hurled at the auto workers’ union, known as the UAW. Car company officials made much of the conviction of several UAW leaders on charges of embezzling union funds, for instance. William Stokes, a process assistant at the Amazon warehouse who voted no, told journalists he had concerns about union conduct.

Other union decisions may have backfired. In December, Amazon lawyers filed lengthy exhibits with regulators delineating thousands of additional individual employees at the Bessemer warehouse they said should be allowed to vote, beyond the 1,500 the union originally proposed. The union later accepted sending ballots to more than 5,800 workers.

Companies often try to pack such proposed bargaining units with additional workers to dilute union support, making it harder to achieve a majority, according to labor experts including former U.S. National Labor Relations Board members.

Harry Johnson, a Morgan, Lewis & Bockius LLP partner representing Amazon, said Amazon simply wanted “to make sure that everybody essentially doing the same job at the fulfillment center would have a chance to vote.” He added that, generally, additional voters can include temporary workers not necessarily more inclined to side with the company.

Stuart Appelbaum, the RWDSU’s president, said in an interview, “The bargaining unit size was larger than we thought appropriate, but the alternative was to go through several years of litigation if we didn’t accept it, prior to the vote.”

He said that despite Friday’s result, the Bessemer campaign had created momentum. “We have breathed life into the labor movement” and “opened the door to Amazon organizing.”

The union’s push for a mail-in vote, rather than the socially distanced in-person election that Amazon proposed, was successful. But the NLRB had set a March 29 deadline for submitting ballots, several weeks after they were mailed. That gave Amazon nearly two additional months to bombard workers with text messages and other communications urging them to vote against unionization.

“Time is the weapon employers use to defeat the union,” said Mark Pearce, a Democratic NLRB chair during the Obama administration.

Concerns about U.S. Postal Service operations, prominent leading up to the November 2020 U.S. presidential election, likely contributed to allowing weeks between the mailing of ballots and the deadline for returning them, Pearce said. Regardless, the additional time likely conferred some benefit to Amazon, he added.

But some labor advocates including U.S. Representative Andy Levin of Michigan said the power imbalance between the workers and the company was just too much to overcome.

“The pressure a company like Amazon builds up against you can feel like a 1,000 lb weight on your chest,” Levin wrote on Twitter. “The company’s goal is to create so much pressure, anxiety and fear — and to make workers feel that pressure will never go away as long as the union is around.”

The setup of Amazon’s warehouse itself may have tipped the vote in the retailer’s favor. The size of many football fields, it was not a space for social gathering, let alone union organizing discussion.

The buzz of machines obscured people’s voices, desks were spread out, social-distancing became the norm due to COVID-19, and cell phone use while on the clock was not allowed, current and former workers told Reuters.

Plott, one of the former Amazon employees, said, “You might be in that area for hours and not see a soul.”