The rebound in the used-car market is yet to run its course and that is evident in results from Americas Car-Mart (NASDAQ:CRMT). What is also evident in the results is that it doesn’t take eCommerce to get business done and grow a car company. America’s Car-Mart has a website, that’s not what we mean. What we mean is that, unlike many of its competitors, you can’t buy a car online, you have to go into the store and go into the store is what many customers are doing. Enough to keep revenue at America’s Car-Mart accelerating and profits rising.

Americas Car-Mart Blows Away The Consensus

Sales at Americas Car-Mart were robust but there is a caveat. Much of the gains are due to a 16.5% increase in the average selling price of its vehicles. That accounts for most of the 16.9% increase in comps but not all of the revenue gains so there is some growth in sales volume as well. That said, with a successful price increase the company is set up to leverage its revenue growth and that can be seen on the bottom line.

On the top-line, the $228.26 million in revenue is up 22.2% from last year and beat the consensus by 500 basis points. It is driven by a 16.9% increase in comps that is driven by a successful price increase and product mix. The number of retail units sold increased by 5.6% which also outpaced expectations, as did the gross profit per vehicle. The average units sold per store per month increased only 2%, however, largely due to the addition of 150 new stores.

Moving down the report, the company was able to keep its SG&A expenses down while revenue rose. This led to significant cost-leveraging related to scale that should persist into the future. In addition, the company’s efforts to “keep people on the road” helped reduced both charge-offs and collections to further boost results. On the bottom line, the GAAP $2.85 in earnings is not only up 62% from last year but also beat the consensus by 12%.

Looking forward, business is expected to continue rebounding under the influence of both demand and expansions. The company is largely self-funding its expansion and plans to open new stores in the 2021 period. The analysts are expecting revenue to remain strong but fall about 3.5% sequentially in the 4th quarter but there is a caveat. The consensus has yet to account for the Q3 strength and will likely rise over the next few weeks.

The Technical Outlook: New Highs Are Confirmed For Americas Car-Mart

Shares of Americas Car-Mart fell in the early pre-market session but the discounted prices were quickly scooped up. Shares rebounded quickly after the open after briefly touching support at the $129.50 level and have since moved up to set another new all-time high. The indicators are both bullish so upward prices should continue but there is some risk. The indicators are not overly strong so upward drift could easily turn into sideways drift if there is no impetus to keep the market buying. 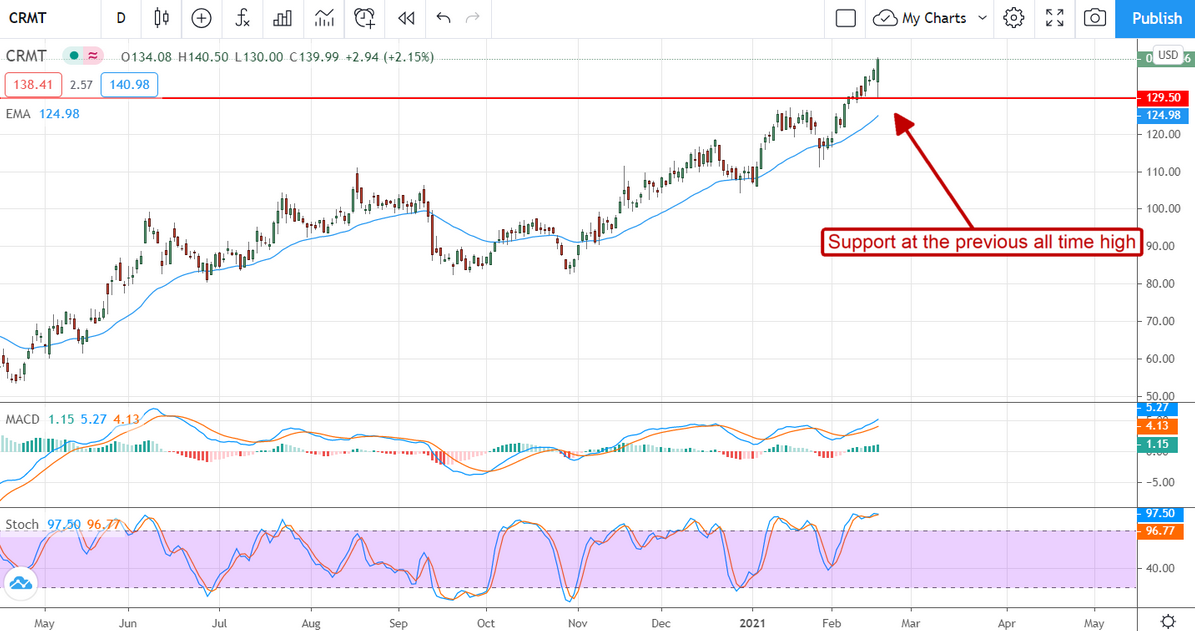