As a new month opens, “reopening” stocks are finding some new life in spite of growing worries about the Delta variant.

Shares of stocks tied to the reopening of the economy, including casinos, restaurants, hotels and airlines, helped lead overnight gains. Overall, Tuesday’s losses appear to be turning around as the major indices rose in pre-market trading. There was a pretty strong rally overnight and bond yields are a little higher, which could give the financials sector a boost after they had a tough time Tuesday.

One thing to consider today is the OPEC meeting. The organization and its allies had already decided earlier this year to raise production by 400,000 barrels per month, so we’ll see if they stick to that. In what could be a sign that OPEC expects strong global growth, it now says demand will increase by 4.2 million barrels per day in 2022, according to Reuters. That’s up from the previous forecast of 3.28 million.

Also, keep an eye on the Cboe Volatility Index (). It’s down again this morning, scraping around the 16 level. That’s near the post-COVID lows, but we have a tricky Friday ahead with the jobs report and people perhaps not wanting to buy premium heading into the long weekend. VIX has stayed low, but there’s a bit of a mixed message shaping up. If VIX starts to rise, that could be a sign that investors are worried about a miss on the jobs number.

So-called “reopening” stocks have been volatile all year, seemingly in demand one day and out of fashion the next. Perhaps some of the strength we are seeing could relate to enthusiasm ahead of the jobs report. Recent jobs data have shown big re-hiring efforts in the leisure and hospitality sector. More of the same in Friday’s report might indicate that the industry continues to see hope ahead.

A pause in the rally Tuesday might have had something to do with overseas data. China’s manufacturing and non-manufacturing metrics both slowed in August, reinforcing ideas that maybe COVID is starting to be a stumbling block for that huge economy.

rose early Wednesday but saw some pressure earlier this week, maybe in part on concerns about Chinese demand going forward. Any weakness there would raise questions about prices for a lot of commodities, not just crude (see chart below). would be another one to watch. Prices have fallen since spring for that key industrial commodity.

Crude still trades at levels well above recent lows. It might be getting propped up a bit by hurricane worries. Even if Ida wasn’t Katrina in terms of overall impact, it did remind everyone that the U.S. oil industry can be vulnerable this time of year, so some market participants might be putting a bit of a hurricane premium, if you will, into the complex.

Another piece of data weighing on the market this week is U.S. consumer confidence. It fell to its lowest level since February, according to the Conference Board, as people fretted about the Delta variant and inflation.

Looking ahead, more data arrive today, including the Institute for Supply Management’s (ISM) monthly manufacturing index for August. This is one that sometimes moves the market, and it’s been trending lower the last few months. Analysts look for a headline figure of 58.5, down from 59.5 in July, according to research firm Briefing.com.

Remember: Anything above 50 still indicates economic expansion. But a lower number, combined with that bearish data out of China yesterday, might suggest that the two biggest economies in the world are both starting to sag a little. One month isn’t a trend, obviously, but other data recently have also raised eyebrows about possible lower growth.

That’s why Friday’s jobs report could be so important, especially because it might be something the Fed takes into account when Chairman Jerome Powell and company decide on whether and when to taper stimulus. See more below on what analysts expect the jobs report to show and what that might mean.

S&P 500 Win Streak Continues, But For How Long?

In the days leading up to an important jobs report like this one, you often see a lack of trading conviction. That seems to be what’s happening now. This rally has been going on for a long, long time, with August the seventh-straight month of gains. That’s the longest monthly streak for the since 2017, and it’s helped push the SPX up to near its highest valuation since 2000, another thing that may be behind this pause.

By the way there’ve been 14 winning streaks of seven months or longer for the SPX during the past 60 years, according to Bloomberg. Five of them ended in the following month as the index fell. Another four were followed by gains of no more than 3.2% before the streaks ended. The other five delivered advances of 9.7% or more before they concluded.

While there still appears to be a lot of money on the sidelines, it’s unclear how aggressive people feel about putting more in right here and now with the major indices at these levels and major data staring us in the face.

Wheels Up On Airlines Despite Slow Travel Numbers

On a positive note, the airlines were one group of stocks that had a mostly green day yesterday. Shares of Delta Air Lines (NYSE:), United Airlines (NASDAQ:) and American Airlines (NASDAQ:) all rallied. It’s been a real struggle for this sector most of the year. Just as they began seeing passenger demand start to flirt with 2019 levels, the Delta variant arrived to interrupt the party. Daily travel numbers lately haven’t been disastrous, according to Transportation Security Administration (TSA) data, but they’re not too impressive, either.

CPB beat analysts’ consensus estimates, though sales were down from a year earlier. The company’s 2020 sales might have benefitted from the pandemic, when everyone was shut at home, so comparisons are tough. Their sales went off the charts last year.

CHWY was another stock that might have benefitted from people staying home. Sales and adoptions of pets—particularly dogs—soared during the pandemic, and those animals need to keep eating. So we’ll see today if CHWY was able to keep the dog chow flowing out the door. 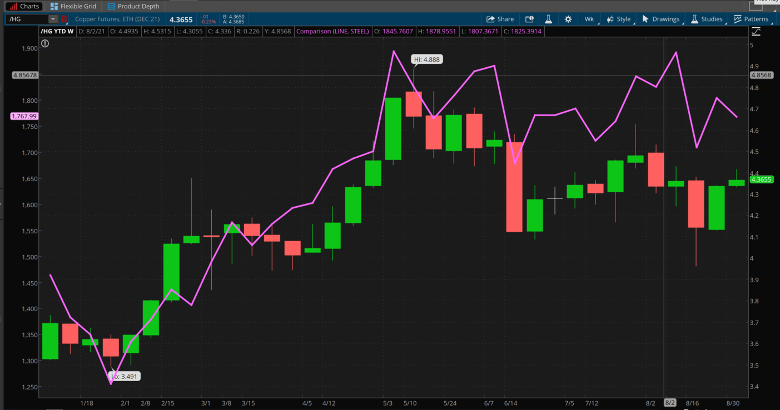 CHART OF THE DAY: STEEL BELTED. The prices of steel (STEEL—purple line) and copper (/HG—candlestick) are both off their spring highs, with copper taking the bigger hit. We’ve also seen crude come down as much as 20% from its peak. What does this tell us? Possibly that demand for commodities is starting to flag, perhaps a sign of slowing economies in China and the U.S. Data Sources: NYSE, CME Group (NASDAQ:). Chart source: The thinkorswim® platform. For illustrative purposes only. Past performance does not guarantee future results.

Wet Blanket Time On Jobs? Optimism is rampant ahead of Friday’s August jobs report. The consensus on Wall Street is for a gain of 750,000 jobs during the month, with the unemployment rate expected to drop to 5.2% from 5.4% in July and hourly earnings to rise 0.3%, according to research firm Briefing.com.

Those numbers, which look like the Goldilocks variety, if you will, come after 943,000 new jobs in July and 850,000 in June. Drilling down, industries that added the most jobs in July included leisure and hospitality, manufacturing, education and health care.

Not to be a wet blanket, but there are some things that you might want to consider before Friday if you’re one of the optimists. First, schools were gearing up for the new year in July and might have hired most of the people they had planned to by then. This could remove one major contributor to the July gains. Also, July’s report was based on surveys conducted before some employers reimposed mask mandates and other restrictions in response to the Delta variant. The August report was compiled as new restrictions started and some companies delayed returns to the office. We don’t know what, if any, effect that might have had on hiring. Maybe Friday we’ll find out.

Shrugging Off The Fed: The jobs report—whatever it reveals—is likely going to be followed by questions about its possible impact on Fed policy. Last week’s speech by Powell made it clear the Fed is getting ready to taper the $120 billion a month stimulus, but the market didn’t seem upset. Stocks and bonds rallied, which is kind of the opposite of what you might expect if the Fed actually does tighten. Why the collective shrug? Maybe because people aren’t clear on the details. The timing and amount of the tapering matter, too, if it actually happens. Different scenarios could play out in different ways, so maybe people are waiting for more insight before trading on it.

For instance, if the Fed decided to aggressively cut its bond purchases—let’s say planning to get them down to zero by mid-2022—that might be a bearish signal for stocks and possibly bonds. No one says they’re going to be that aggressive, of course, but the timing and pace are things to keep in mind. Anyway, a jobs report that shows really big growth, like over a million, might be more likely to have the Fed thinking about a faster taper. On the other hand, recent consumer confidence data and those numbers out of China could have the Fed feeling more reserved.

The Bright Side Of Tapering: Another thing to consider is that maybe the market shrugged off a potential taper because people aren’t worried about a repeat of the “taper tantrum” of 2013 when stocks sold off at the Fed’s first hints that it would loosen the training wheels. The market and Fed have been through this before, the thinking goes, and won’t get so spooked this time. That could be one reason for the low levels of volatility we’re seeing.

Looking back at 2013, some analysts say the whole “tantrum” aspect is over-hyped to begin with. Yes, stocks stumbled for a few months, but the year itself ended up being one of the best in recent memory for the SPX. A move to reduce the economy’s dependence on Fed support—then or now—would possibly send a wave of confidence through markets that perhaps things are on their way back to a more normal environment. In the 13 years since the 2008 recession, there’s only been one four-year period of rising rates (2015-2018), and the Fed’s benchmark borrowing rate has been at effectively zero more often than not.