The trading week is off to a sort of “delayed dog days of summer” start. Investors might want to be cautious, with a relatively quiet earnings week and a Friday inflation report as the sole “big number” on the calendar. A lack of an obvious catalyst could make for a volatile week, and despite a flat start to U.S. markets, the Cboe Volatility Index () starts the day a good bit higher. Overseas markets are mixed, except Asia, where China reported higher than expected exports in August.

Back To Work, And Maybe Back To Normal Trading Volume?

Despite the jobs report Friday (see more below), trading volume remained low that session, and has been averaging on the low side for a few weeks. That’s not too surprising, considering the time of year. Perhaps we’ll see it tick up again this week as the holiday and summer vacations end.

Another thing ending is enhanced U.S. unemployment benefits, which expired over the weekend. It’s unclear if this might encourage people who’ve held off returning to work to go out and test the job market again. If that’s the case, maybe it could help businesses resolve some of the shortages and service issues many have had recently. Another reason there might be an injection of new workers is that kids are back in school, alleviating child-care considerations for some.

The low volume on Wall Street makes it a bit harder to assess recent price action. The market’s been regularly making new highs, but not with the kind of conviction that maybe the bulls would have liked to see. Once people get back and the volume ticks up, we’ll see which way the market heads and maybe get a better sense of the mood.

This week arguably isn’t the best one to try to entice people back, with a light schedule on both the data and earnings calendars. The Producer Price Index (PPI) on Friday is probably the key number to track. There’s Lululemon (NASDAQ:) and Kroger (NYSE:), but otherwise not a whole lot to watch.

Instead, investors may monitor news out of Washington for any progress on the budget or infrastructure bills. Last Friday, President Joe Biden made a television appearance urging Congress to act, saying passage would help create jobs.

There’s also some stuff going on overseas. Investors might want to follow developments with the European Central Bank (ECB), which meets this week and announces any policy moves on Thursday. Earnings-wise, the week doesn’t look too crowded, either.

Some analysts said last week they expect the ECB to announce a tapering of COVID-related stimulus by late this year, so any hints it possibly drops at the Thursday press conference could be worth tracking, considering central banks often try to sync their policy, to some extent. The Fed meets later this month.

rallied over the long weekend, as El Salvador officially adopted the cryptocurrency as a form of legal tender, possibly fuelling speculation that the move might spur some new forms of demand. Also overnight, Treasury yields ticked up amid inflation concerns, but both and —which had been rallying in recent sessions—took a dip lower.

Looking Back At Jobs Data: It’s Not All Bad

After a long weekend away, Friday’s U.S. government August jobs report seems like a long time ago. Still, it’s worth quickly diving deeper into the numbers and what they meant, especially because Fed Chairman Jerome Powell recently told investors the Fed is closely watching employment data as the central bank decides when to taper monetary stimulus.

As a reminder, job gains of 235,000 in August were more than 500,000 below the average analyst estimate for 750,000, raising new questions about the pace of economic growth as the country continues to struggle with COVID.

Overall, the numbers weren’t as bad as they looked at first glance. The headline number seems to really reflect the Delta variant. The reason? Zero jobs growth in the Leisure and Hospitality sector, which seems really odd after many months of huge gains in that category.

So it looks like many restaurants and bars that were opening just took a halt. That same metric may also have played out in the retail sector, with the government reporting a drop of 28,000 jobs there in August. Basically, the Delta variant appears to be affecting those numbers and the pace of opening of restaurants and bars.

But there were some good numbers in the report, and it would be a shame if they were overlooked. Manufacturing, professional services, transportation—all saw really nice numbers, so there were pockets of things really going quite well. The public-facing jobs are the ones where things got off track, and we may need to see another month or two of data before it’s clear if this was a momentary development or something with staying power. 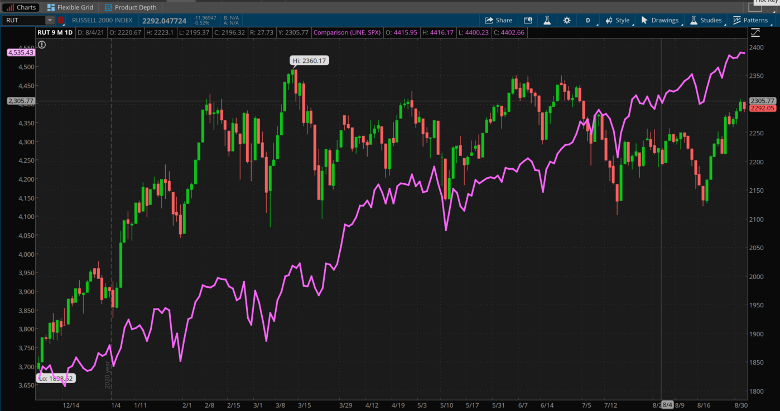 CHART OF THE DAY: GOLIATH BEATING DAVID. The small-cap Russell 2000 Index (RUT—candlestick) started out the year way ahead of the large-cap S&P 500 Index (SPX—purple line). Since March, however, it’s been the SPX leading the way. A major contributor to the gain in the SPX was its largest members, the so-called “mega-cap” Tech companies with market caps of $1 trillion or more. Data sources: Russell, S&P Dow Jones Indices. Chart source: The thinkorswim® platform. For illustrative purposes only. Past performance does not guarantee future results.

Price Pain: Although small-caps enjoyed a decent run over the last couple of weeks, the remains about 3% below its all-time peak reached back in March. The is up 16% since RUT made its high. This is kind of opposite of what you might expect in a post-recession economy. Small-caps frequently lead the charge out of the gate after the tide turns. You’d think that all the economic stimulus this year—much of which people likely spent on things like travel and dining out—would have helped small-caps in industries like restaurants and hotels. Also, the booming housing market could have boosted the fortunes of many smaller bank stocks, which happen to be well represented in the RUT.

For a while, it looked like that was happening. The RUT climbed an amazing 19% between the end of 2020 and mid-March. Since then it’s treaded water. One possible reason? Inflation. As one analyst told our media affiliate, the TD Ameritrade Network* last week, small-caps can be more susceptible than larger ones to the impact of inflation because small-caps often have inferior pricing power compared with large caps. A small company that’s forced to pay up for employees and goods during inflationary times can try to pass along costs to customers or take a hit to the margins. Customer resistance to higher prices from smaller companies means the choice often ends up being a margin hit, which can hurt profitability. Obviously, large-caps face the same challenges, but tend to have more pricing power. Companies like Coca-Cola (NYSE:), Kimberly-Clark (NYSE:) and Procter & Gamble (NYSE:) announced price rises earlier this year. Those companies share one thing in common: They’re huge.

Chipping Off Old Engine Block Supply: It’s been four decades since cars ran on standard engines and parts. Unless you’re going real old school vintage, or hoping to snatch a refurbished “hooptie,” your car needs semiconductor chips. As you know by now, the global chip bowl has been running low, and “re-ups” are getting further and further in the offing. No re-up means no new ride (or very few, at least).

So, it shouldn’t be much of a surprise to learn that General Motors (NYSE:) last week announced it’s shutting down or significantly reducing production across plants in North America, Canada and Mexico. This coincides with a similar move by Ford (NYSE:), which also announced last week that it’s halting production of pickups and other profitable models in its Missouri, Michigan and Kentucky plants. In case you’re wondering, the chip shortage is affecting automakers across the globe, like Toyota (NYSE:), Nissan (OTC:) and even British manufacturer Vauxhall Motors, which was recently acquired by Dutch conglomerate Stellantis (NYSE:). As the vehicle market remains tight, car prices have surged to record levels. And while car sales dropped in July, the electronic components sector—the businesses that snapped up most of the chips—is experiencing a sales boom, according to a recent BBC report. Year to date, all of the above carmakers are trailing the SPX in market performance, save Ford, which leads the pack by a wide margin. However, some analysts argue that most of the chip shortage negativity has now been priced into auto stocks. Time will tell.

Our Snacking Habits Might Be Curtailed: But not for the usual reasons pertaining to our waistlines. Mondelez (NASDAQ:), the maker of Ritz and Saltine crackers and Oreo cookies, is in its fourth week of a strike by unionized workers at its bakeries and distribution centers in at least five states who oppose proposed contract changes to work schedules, overtime and health care. This is on top of global supply chain issues and labor shortages that have impacted everything from microchips to potato chips. Retailers have been left scrambling to figure out the right balance of supply and demand for their shelves.

So far, the consumer staples industry is up about 8% year to date, that compares with about 20% for the SPX, and about 5.7% for MDLZ, despite decent earnings that have beat analysts’ expectations. Plus the fact that we’ve been closer to the kitchen cabinet where the Oreos are kept while working from home during the pandemic. Something to chew on.