Activision Blizzard (NASDAQ:ATVI) is extending Friday’s breakout and is moving past the November highs in the early going. ATVI pierced a key overhead trendline during Friday’s 2.6% gain on accelerating trade. We believe the stock is setting up well for a retest of the all time highs set back in early August. 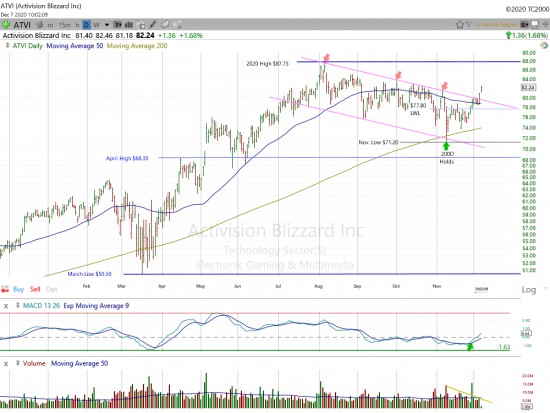 Shortly after peaking on August 6th, after gaining 74% off the March lows, ATVI entered a healthy consolidation pattern. During this phase the stock put in three straight lower monthly highs paired with three straight lower monthly lows. That pattern was broken in early December. With ATVI far from overbought(daily MACD) a fresh rally leg could pack quite a punch. We regard the stock as a low risk buy near current levels. Solid footing is in place near the $80.00 area. On the downside, a close back below last week’s low($77.80) would indicate more consolidation is ahead before ATVI can mount a meaningful rebound.