The market finished the week up by about 60 bps, after a flat session on Friday. The BLS Jobs report seemed to be met with a lot of confusion, with a big miss on the headline report but with a big drop in the . Overall, the number was very strong and did nothing to derail the Fed from a potential taper at the November meeting.

The most important number seemed to be the which fell to 8.8% from 9.2% in July, while rose 0.6% month-over-month. These numbers are too strong for the Fed to ignore and will prompt them to act. This will lead them to make a powerful policy statement at the September meeting for the start of tapering at the November FOMC meeting.

Bond yields rose sharply on Friday, and slumped because of the inflation fear due to the big rise in wage growth. But that wage growth number has been all over the place since the pandemic began, and it seems impossible to draw any conclusion from it. Especially on a year-over-year basis, but wage growth had been trending higher before the pandemic. 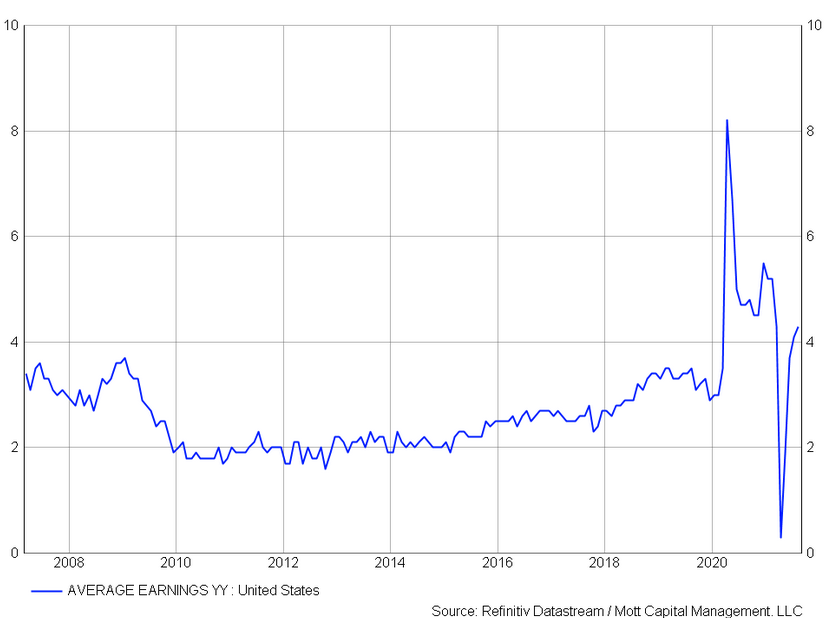 In the past, the 8.8% underemployment rate would not have stood in the way of the Fed rate hikes, let alone ending QE. The chart below shows that the Fed was raising rates in both 2004 and 2015. The QE program of the post-financial crisis had long ended, and of course, there was no QE in the early 2000s.

From a perspective of a hurdle to end tapering, that hurdle has been met. I reviewed this a few seeks back. (Free Premium commentary – Tapering Is Coming, And It May Lead To Equity Market Turbulence 8.14.21). 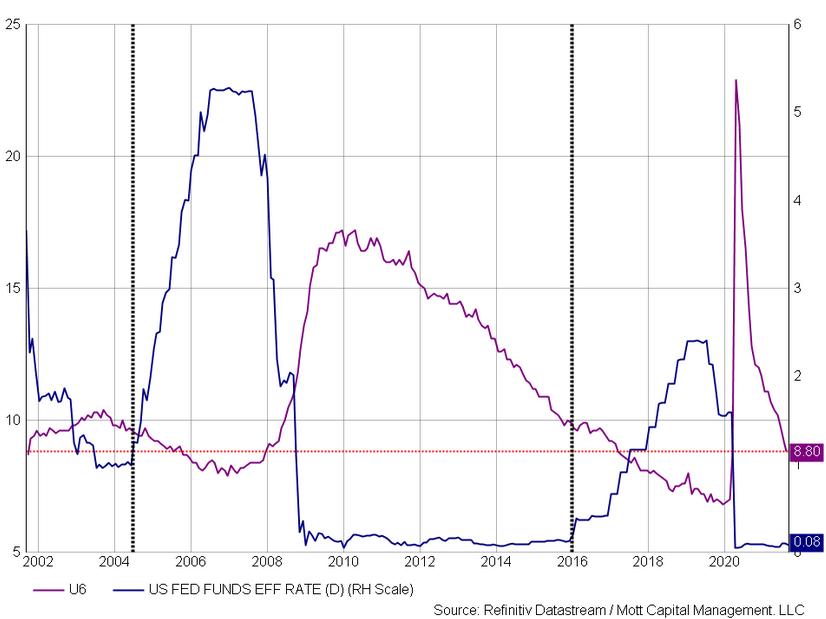 The completed a rising triangle pattern on the 30-minute chart on Thursday and retested it on Friday. Typically a rising wedge pattern is bearish and a reversal pattern. There is support down to around 4,470.

It looks like Netflix (NASDAQ:) was in the middle of a gamma squeeze. All of the characteristics of one were there, with the rising stock price, call volume, and implied volatility, along with falling skew. Can it persist and rise further, yes, that is entirely possible, but these things do end rather badly, so one should be careful at the very least.

Comcast (NASDAQ:) has been really strong in recent days, and it has to this point broken free of its consolidation pattern. When measuring from the January lows to March peak, it would indicate the shares could still rise further perhaps to $68.50. That is still quite a distance.

I’m keeping eye on Diebold Nixdorf (NYSE:); I know a really boring company one would think. But I recently used one of their self-check out machines in a Zara when I took my kids back to school shopping and it really blew me away.

You just drop your clothes in a basket and all the items instantly rang up, using RFID. Much better than those scanning machines. The stock is trying to break out here, moving above a downtrend, and the RSI is trying to reverse. The next big test comes around $12.

Uber Technologies (NYSE:) was really trying hard to turn the corner here, and you can see how the trend in the RSI was starting to rise. There was a ramp up in options activity, but I really need look much closer on Tuesday, once all the open interest changes come in.

Intuitive Surgical (NASDAQ:) was starting to show some reversal trends, with a bearish RSI. Additionally, the March to April run-up in price appeared to have played out from the June break out. It made this a pretty good spot for the stock to stop rising and potentially reverse.