Cheap stocks are fun. We can buy a lot of shares without shelling out too much dough.

Generally speaking, most single-digit stocks are “cheap for a reason”—they are losers. But we contrarians leave no discarded stone unturned. Especially in our search for dividends that we can retire on.

There are a few inexpensive stocks that actually pay. And a select set of them that are even worth buying for their dividends.

In a minute we’ll discuss five “economy lot” yield plays that pay from 6.3% to 11.8%. These are all single-digit share prices that sell for $9 or less today. But first let’s highlight a strategy from Fidelity that shows the fat returns we can bank from this bargain bin.

Some high-profile funds specialize in low-priced stocks. Let’s consider . This fund, which launched in late 1989, was led by manager Joel Tillinghast and floated with stocks under $15 per share. Fast-forward more than 30 years, and Tillinghast has accumulated more than $33 billion in assets and rewarded his investors with 5,000%+ returns! 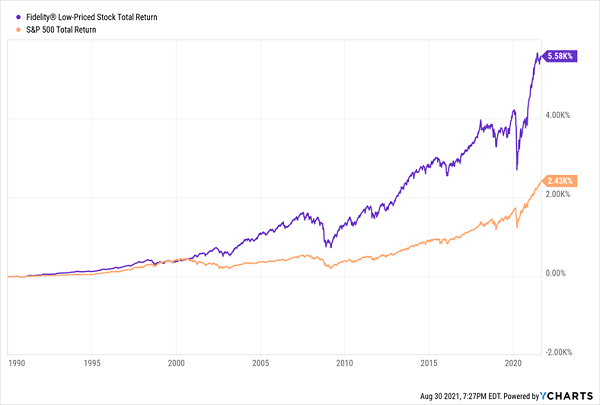 FLPSX isn’t quite the renegade it once was, dealing more in midcaps nowadays, and raising its share-price threshold to $35. As with many of us, the wild days are behind FLPSX. Now it is a bit boring.

In my opinion, it will pay to live on the investing edge in the months ahead. Small stocks have been slammed in 2021. The small cap index , for example, has already corrected by about 10%. It is bouncing back and, in my opinion, it’s just getting started: 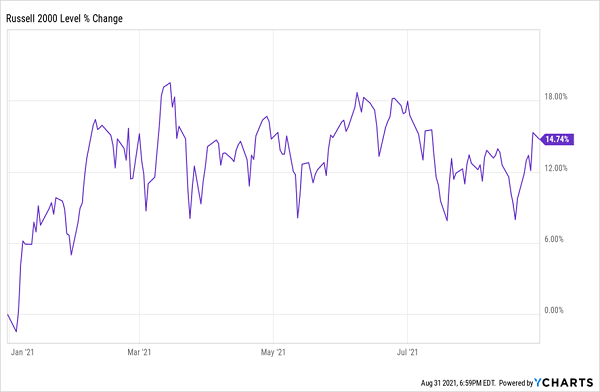 This action has been unfolding over the last five-and-a-half months after the Russell 2000 peaked on Mar. 15. This “consolidation period” is a positive development. Since it is happening within the context of a broader-up move, it means the most likely resolution will be to the upside.

Picking low-priced stocks is about more than just picking stocks with low prices. We want good businesses with solid dividends and no “red flags” that may negatively impact the firm’s future cash flows. With this in mind, let’s consider a five-pack that sure looks interesting on paper.

We’ll start with Annaly Capital Management (NYSE:), one of the largest mortgage real estate investment trusts (mREITs) on the market.

A quick reminder: mREITs differ from traditional REITs in that they don’t own physical real estate—they own paper. Specifically, they raise funding across a variety of sources (common equity, preferreds, debt, repurchase agreements and more) to purchase mortgages and mortgage-backed securities, and profit on the net interest margin between the two.

As for Annaly, it has used 10 different financing options to build a diversified portfolio of nearly $10 billion in unencumbered assets.

The COVID pandemic might have been bad for REITs generally, but mREITs really took it on the chin. Massive volatility in interest rates caused investors to jump ship in all sorts of debt, and ensuing margin calls triggered a continued spiral in asset sales. Consider this: While the S&P 500 plunged 34% between Feb. 19 and March 23 of 2020, the VanEck Vectors Mortgage REIT Income ETF (NYSE:) atrophied by nearly 65%.

The space (and Annaly) have rebounded since, but there are reasons to be wary of NLY.

For one, Annaly’s long-term history of underperformance against the mREIT space continues to rear its ugly head, with NLY’s recovery rally just not as robust as its peers.

NLY Has Flattened Out 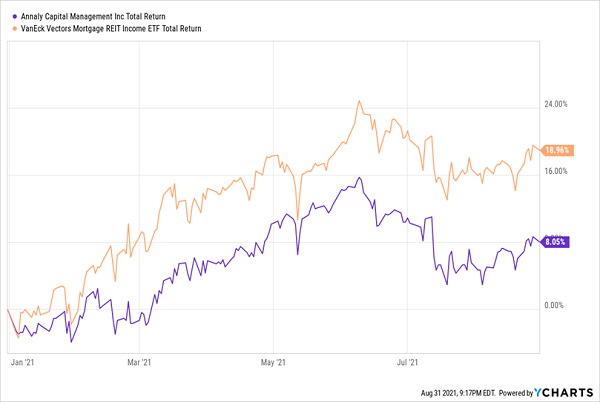 More important is what NLY did last year.

That is, Annaly cut its dividend—again. Its 12% reduction in its July 2020 payout was just the latest in a string of hacks suffered over the past decade. Yes, Annaly’s core earnings are enough to cover its current dividend—for now—but its track record of stretching to make its payouts mean constantly looking over your shoulder anytime mREITs get into trouble.

MFA Financial (NYSE:) is another mREIT, and like Annaly, also coming off a dividend cut. But the story seems at least a little different here, so let’s dig in a little deeper.

It too was understandably banged around during COVID. In fact, MFA had to enter into multiple forbearance agreements with several of its counterparties to keep from getting hit with margin calls. And, most importantly to dividend investors, the company briefly suspended its 20-cent quarterly payout, for half a year. When it returned, the dividend started up at 5 cents, then 7.5 cents, and most recently 10 cents (in July 2021).

What’s different about this dividend comeback?

Prior to 2020, MFA’s payout had gone untouched since 2013, and before that, the payout tended to vary from quarter to quarter, between 20 and 25 cents, so we don’t have a dividend history that always points in the same direction. Moreover, MFA has aggressively started to ramp its payout back up; in fact, new buyers might be in for even larger yields going forward should this mREIT’s recovery persist.

Most recently, in the second quarter, a big Q2 beat forced several analysts to push their annual estimates higher. The acquisition of BPL originator/servicer Lima One, as well as lower financing costs, should provide additional lift going forward.

Is it risky? Absolutely. But that’s life with mREITs—we must choose what we buy, and when we buy, carefully.

Nordic American Tankers Limited (NYSE:) is an international tanker company that deals in one vessel, and one vessel only: Suezmax oil tankers.

Hearing “Suez” likely rings a bell. That’s because of the highly publicized Ever Given containership, which managed to wedge itself in the Suez Canal in March (and into April!). Interestingly, Ever Given was roughly “Suezmax” size—that is, the largest-sized ship allowed to pass through the Suez Canal with any cargo.

Nordic’s fleet currently consists of 25 Suezmax tankers, each with the capacity to carry 1 million barrels of crude.

Oil transport (and how profitable it is) is far from a simple supply-and-demand game. For instance, geopolitical instability can literally cause shipping routes to change as tankers try to avoid conflict. Broader changes in which countries are importing and exporting more can also significantly affect the profitability of tankers’ operations.

Or take the bizarre situation in 2020, where oil demand (and thus oil prices) collapsed. That should have triggered a miserable run for tanker stocks, but we saw quite the opposite. That’s because land-based oil storage became so overburdened that tanker companies such as NAT were able to use their vessels for short-term storage—and charged several times more than their typical daily rates for the privilege. 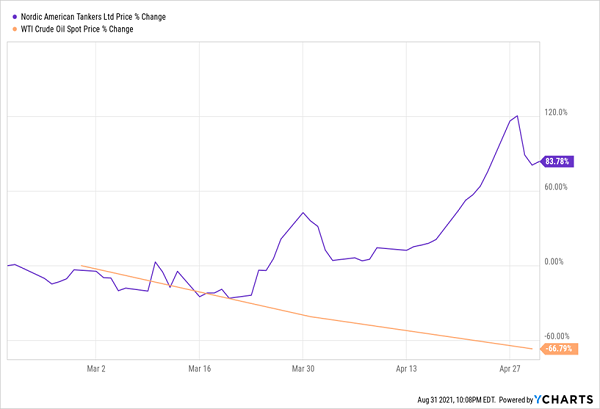 Unfortunately, that was a relatively fortunate anomaly compared to what NAT has experienced in recent years.

Oil Up or Oil Down, Nordic Has Mostly Struggled for Years 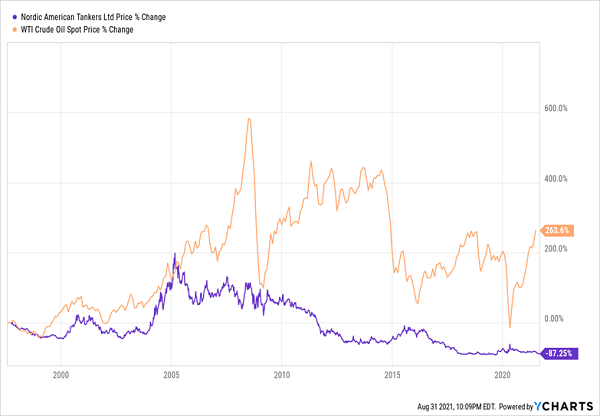 But surely, the nearly 12% yield makes a difference?

It has, but not enough to turn around that trend. More important, though, is the nature of the payout, which comes and goes as profits do. In fact, the current 12% yield calculation is largely dependent on the 20-cent dividend paid out last September. Since then? Four cents, 2 cents and 2 cents.

A different way to play energy is via master limited partnerships (MLPs) focused on transportation and storage, such as Antero Midstream Corp (NYSE:). Antero owns more than 370 miles of gathering pipelines, as well as compression stations, fractionation plants and even freshwater pipelines and storage.

Infrastructure plays like Antero tend to move up and down with overall energy prices, but not as much as exploration-and-production companies. Instead, because they’re effectively “toll takers” that make money off of the commodities flowing through their systems, what matters most is high volumes, and thus, high demand.

I examined Antero a few months ago, and at the time, I mentioned that AM was just a month removed from a 27% dividend cut that brought its distribution down to 22.5 cents per share (from 30.75 cents). I also mentioned that its Equitrans Midstream (NYSE:) Mountain Valley Pipeline project, which Antero holds 47.8% ownership stake in, wouldn’t enter service until next year. My takeaway then: “Nice yields, but upside will be a struggle from here, especially in the short term.”

However, does AM make sense now, looking out past the delta variant to the next potential push higher in oil?

Unfortunately, no. While the new (and still generous) distribution is well-covered at the moment, its valuation is looking plump compared to its peers. Moreover, Raymond James analysts point out several structural issues, such as the fact that “the majority of the cash flow uplift” from higher gas and natural gas liquids prices actually accrues to Antero Resources (NYSE:), which formed AM and owns a 29% equity stake in the MLP.

It’s a tempting low-priced stock, but there are plenty of headwinds to consider before buying.

The Templeton Global Income Fund (NYSE:) is a well-established fixed-income fund that kicked off operations in 1988. The roughly 200-issue portfolio is primarily invested in local currency government and agency bonds, which make up about 85% of the portfolio. The rest is a smattering of non-local currency sovereign bonds, “supranational” bonds (issued by two or more countries) and cash.

And despite the “global” moniker, which usually includes a large slug of U.S. assets, as well as lots of developed-market exposure, GIM is primarily invested in emerging markets, such as South Korea (17%), Indonesia (12%) and Brazil (10%).

This CEF doesn’t use any leverage, and it has minimal exposure to derivatives. So ultimately, whether GIM is worth the squeeze comes down to how much “value add” Templeton management provides over a basic index.

The Answer: Not Much 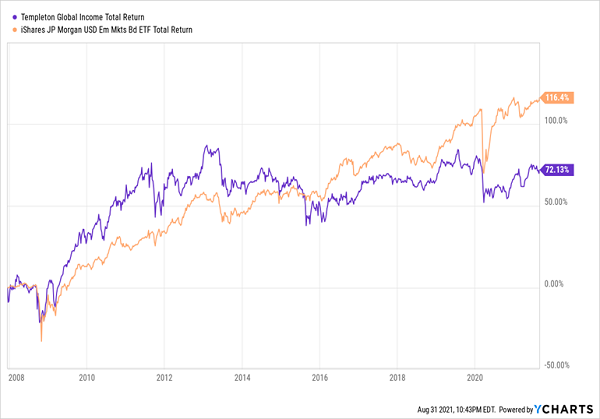 A basic emerging-market bond ETF has effectively smoked Templeton Global Income (as much as a collection of bonds can smoke another collection of bonds, anyway). In fact, GIM is basically flat since late 2011—and that’s including its oversized payout.