As we Americans reemerge from our homes, select “return to normal” dividend payers are poised to deliver big gains. I’m talking about upside of 40% in addition to their 4% to 10% current yields.

A quick look at some of the best ETFs over the past three months shows where investors believe the reopening money is heading:

Unfortunately for income investors, these industries tend not to pay dividends. Travel tech? Sports gaming? Airlines, where payouts were suspended right and left? With the exception of energy, the recovery doesn’t look too lucrative for income-minded investors like us, does it?

But as always, we’ll simply dig deeper for our dividends. Our search rewards us with four recovery stocks paying between 4% and 10%.

Apartment Income REIT Corp (NYSE:AIRC) is easily the freshest face of this group, and one of the newest stocks on Wall Street.

In December 2020, Aimco (NYSE:AIV), a Denver-based developer and redeveloper of apartment communities, separated its development and investing activities by spinning off the latter as AIRC. The resultant real estate investment trust (REIT) owns 93.5% of a portfolio of 98 “stabilized” properties totaling 26,599 apartment homes across a number of large markets, including Los Angeles, Washington, D.C., Philadelphia, Boston and Miami.

A couple months later, and it started to take off like a rocket.

AIRC Is Off to a Hot Start 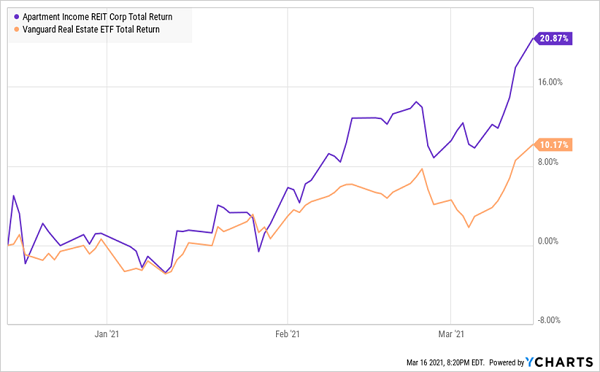 AIRC, like the other stocks we’ll get through today, represents some facet of the “recovery/reopening” story. In this case, housing REITs are generally expected to fare better as their tenants regain financial stability. Not that Apartment Income is in a bad place—by the end of 2020, for instance, it had collected 98.3% of residential rents owed through the start of October.

However, its starting dividend of 43 cents quarterly and a quick run-up in shares equate to a fine-but-not-exactly-great dividend just south of 4%. And while its operations aren’t new, AIRC is only really starting to find its footing as an individual entity.

While it could be promising as a short-term trade, let AIRC establish a track record and see how its operations start to shape up compared to other coastal apartment REITs.

Brixmor Property (NYSE:BRX) boasts roughly 69 million square feet of retail space across nearly 400 open-air shopping centers in a few dozen states. The company boasts more than 5,000 tenants, with Walmart (NYSE:WMT), Kroger (NYSE:KR) and TJX Cos. (NYSE:TJX) among the largest of those.

While several of those anchor stores remained open thanks to their “essential business” status, many of Brixmor’s other tenants weren’t so lucky. Shareholders knocked BRX shares down by nearly two-thirds during the worst of the downturn. The REIT suspended its quarterly cash dividend in May. And the stock has been slow to come up off the mat, only reaching pre-pandemic levels over the past month or so.

But things are starting to look up.

Brixmor resumed its dividend earlier this year; it’s a 21.5-cent quarterly payout that’s about 25% less than its old distribution, but payout growth is likely in the cards once business normalizes. Uncollected rents are still an issue, but BRX has set aside reserves for 70% of those and believe the rest will end up paid. Perhaps most interesting, however, is a line from Piper Sandler’s research team:

“While certain categories remain under pressure, BRX is seeing demand from new concepts, including restaurants, which shows how the real issue is the curtailment of businesses by government regulations, not necessarily business model.”

In other words, when more states feel comfortable pulling off the guardrails, Brixmor might have even more runway to go. The fact that it’s decently priced at less than 13 times 2021 FFO projections (versus sky-high prices for much of the rest of the market) also helps.

Gaming & Leisure Properties (NASDAQ:GLPI) is a casino and gaming REIT, but it’s certainly not just a Vegas play. GLPI’s portfolio of roughly 50 assets is spread across 16 states, from Colorado to Louisiana to Ohio to Maine.

Just like Brixmor, Gaming & Leisure Properties suffered mightily from COVID lockdowns. Every one of its tenants was forced to close for at least some period of time. The stock plunged by as much as 70%. GLPI cut its dividend, but only by a little more than 14%, to 65 cents per share.

GLPI Is Only Now Approaching Its Pre-Pandemic Peak 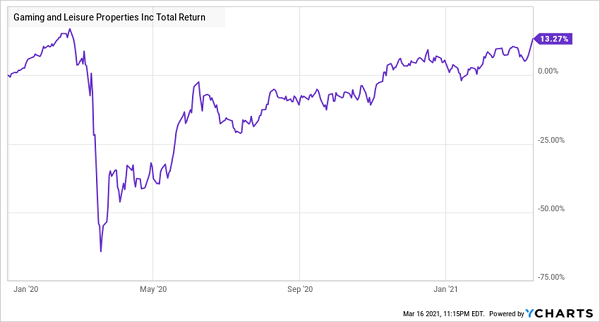 But despite the stock panic, GLPI’s operations frankly weren’t all that bad. Consider that in Q2 and Q3 2020, just one of its tenants (Casino Queen) failed to remain current with respect to their rental obligations, and by Q4, Casino Queen had paid up. “We collected all rent that was due in 2020,” the REIT said in its Q4 release.

Shorter-term, most in the industry expect a flood from pent-up demand. Wynn Resorts (NASDAQ:WYNN) CEO Matt Maddox has said “I think it will be similar to the Roaring Twenties after the pandemic of 1918 and 1919.” But GLPI might be just as attractive longer-term as an increasing number of states legalize gambling to help replenish their coffers.

For now, you can buy that potential—and a nearly 6% yield—for roughly 13 times 2021 AFFO estimates. Not bad.

Antero Midstream Corp (NYSE:AM) was formed back in 2012 to hold and develop energy infrastructure to help service Antero Resources' (NYSE:AR) growing natural gas and natural gas liquid (NGL) production. It owns more than 370 miles of gathering pipelines, as well as compression stations, fractionation plants, and even freshwater pipelines and storage, in the Marcellus and Utica shales. The firm also has a 50/50 joint venture with MPLX (NYSE:MPLX).

When most people think about the rebound in energy over the past few months, they mostly think about the spike in oil prices, which is coming amid expectations for renewed personal and industrial demand. But there’s also been a (less consistent) recovery in natural gas prices, which has helped to buoy the likes of Antero Midstream and other nat-gas infrastructure plays.

Antero Has Outstripped Its Energy and MLP Peers 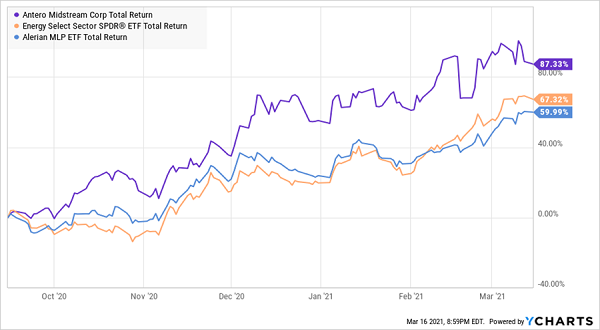 But do you notice that large, rapid dip in February?

That came on the heels of an interesting fourth-quarter report in which AM provided higher guidance for 2021 EBITDA… but cut its dividend by 27%.

You’ll notice AM has since filled that gap, too. Perhaps investors have realized that there are some upsides to paring back its still-high payout; Antero will be able to invest more in capex and spur greater growth going forward.

Still, Antero Midstream is at best fairly valued at current prices, and there are much more direct ways to chase down continued gains in energy prices, be they nat gas or oil. And most of them aren’t a month removed from pulling the rug out from under shareholders.