With US major indices trading at record-high levels, the upcoming week could bring more excitement as companies begin reporting first-quarter earnings amid some encouraging signs about the nation’s economic recovery.

Overall earnings are expected to have jumped 25% in the first quarter from a year ago, according to Refinitiv data. That would be the biggest quarterly gain since 2018, when tax cuts under former President Donald Trump drove a surge in profit growth.

The Q1 earnings season will also help to clear some uncertainty related to the future performance of technology stocks which benefited immensely during the pandemic and stay-at-home environment that followed the viral spread. If the tech giants continue to report strong profit and sales, it will indicate that these players can sustain the gains they made during the COVID-19 outbreak.

JPMorgan Chase (NYSE:) will report its first-quarter earnings on Wednesday, Apr.14, before the market open. Analysts are expecting $3.06 a share profit on sales of $30.46 billion.

The Wall Street financial institution powerhouse surprised investors in January when it posted and smashed analysts’ expectations despite the devastating economic impact on some businesses and consumers, caused by the lockdowns. 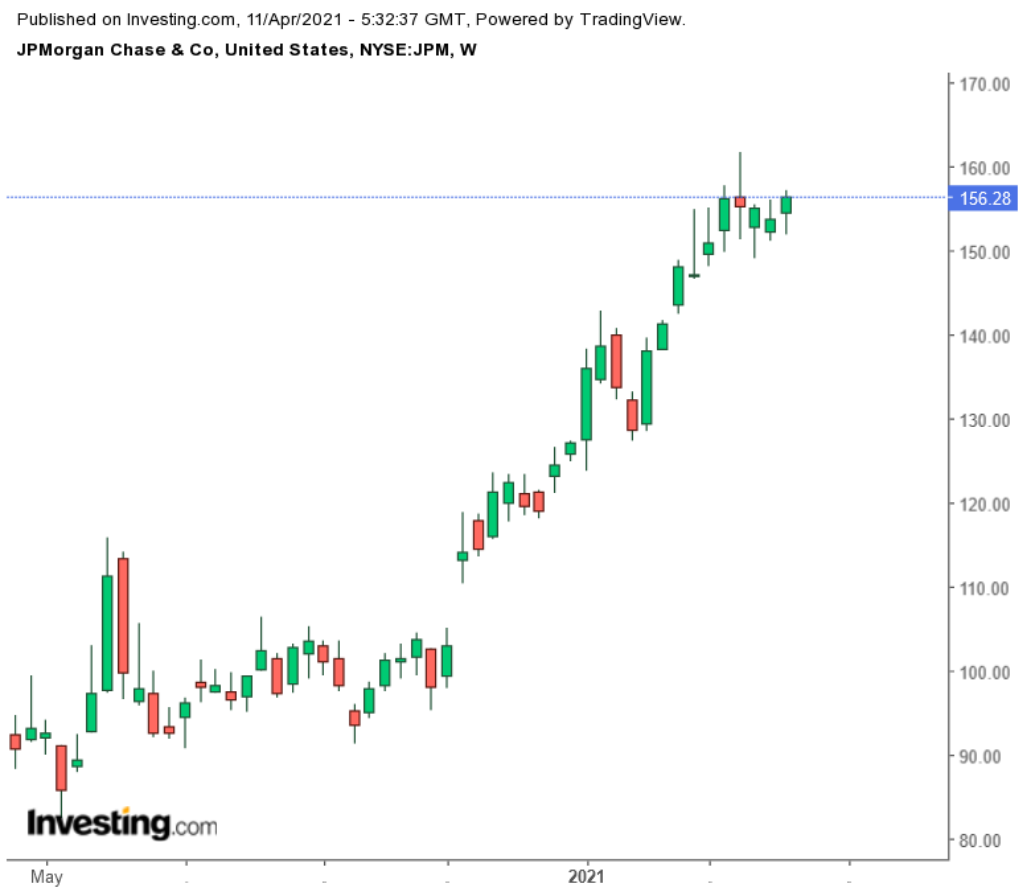 The global lender is seeing a quick revival to its profitability after a couple of bad quarters, helped by its trading division and fees from its corporate and investment banking groups. Investors will be keen to know whether volatility in markets during the first quarter again helped the lender to beat expectations.

JPM stock closed on Friday at $156.28, after rallying strongly so far this year as the US economic recovery accelerates. Shares are up 23% in 2021, handily beating the S&P 500’s 9% expansion.

Delta Air Lines (NYSE:) will report Q1 earnings on Thursday, Apr. 15, before the market open. On average, analysts are expecting a loss of $2.84 a share on sales of $4.02 billion. 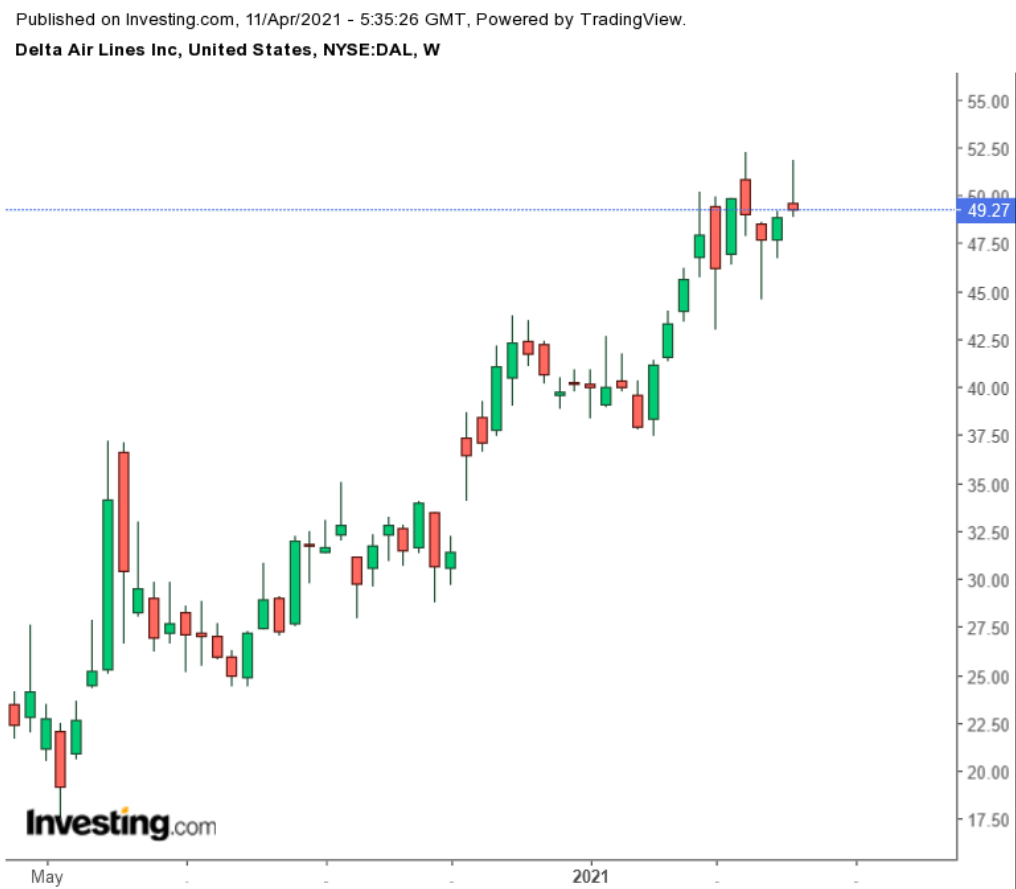 The global airline industry is trying to stage a comeback after a brutal 2020 in which air traffic plunged amid the surging COVID-19 infections. Delta Air CEO, Ed Bastian, in a New Year’s memo, told employees in January that the carrier continues to aim for by the spring in a “year of recovery.” The last air travel data suggests that Bastian’s revival expectations were perhaps correct.

Domestic air travel in the US is rebounding with the acceleration of coronavirus vaccine rollouts. More than a million customers have flown Delta over the past few days, reaching levels the company hasn’t seen since before the pandemic.

The Centers for Disease Control and Prevention said last month that vaccinated individuals don’t need a COVID test and don’t need to quarantine when traveling domestically. Shares of Delta Air closed on Friday at $49.27, after more than doubling in the past year.

Snack and beverage giant PepsiCo (NASDAQ:) will also report Q1 earnings on Thursday before the market opens. Analysts, on average, expect $1.12 a share profit on sales of $14.55 billion. 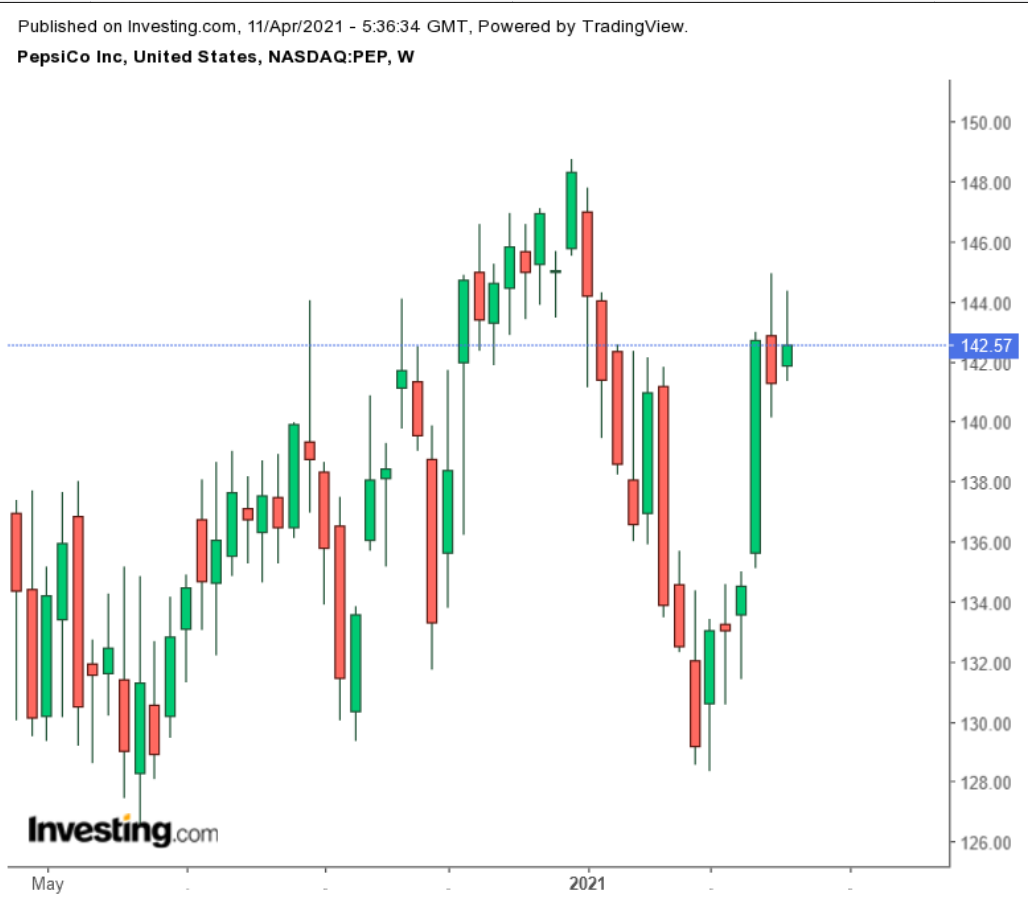 During the pandemic, Pepsi from homebound consumers stocking up on snack foods and beverages, helped by its diversified portfolio of snack brands, such as Tostitos, Fritos, Ruffles, and Cheetos.

In an interview with Bloomberg in February, Chief Financial Officer Hugh Johnston characterized the company’s recent  performance as one of its best.

“People have to eat, they have to drink, and we figured out how to get it to them in the channels where they want it,” he said. Despite this impressive performance, PEP stock has struggled this year, falling about 4%. Shares closed on Friday at $142.57.