The market’s legendary investors built their names, and their fortunes, on success, the paths they followed were as varied and interesting as in any human endeavor. And one of the best such stories for market success is that of Israel Englander.

Englander is one of the true geniuses at work in the stock markets today. In 1988, with $35 million in seed money, Englander started Millennium Management. In the decades since, Englander had grown his firm into a $50 billion behemoth. In short, when Englander talks – or acts – on the markets, investors pay attention.

Taking this into consideration, we wanted to get all the details on three stocks the billionaire’s fund snapped up recently. Running the tickers through Investing Insights, we found out that each name scores a ‘Perfect 10’ smart score. Let’s take a closer look.

The first of Englander’s new positions is ATAI Life Sciences (NASDAQ:), a clinical-stage biopharma company with a focus on mental health – an important area of pharmacology with plenty of unmet medical needs for a research firm to explore. ATAI was founded in 2018, and went public this past June through an IPO.

The company’s IPO was initially announced with 14.286 million shares going on the market with a price between $13 and $15 each. The actual event was upsized, to 15 million shares, and priced at $15, the top end of the range. The company realized over $258 million in gross proceeds from the sale.

ATAI boasts an active research pipeline, with 11 separate tracks under investigation. While 6 are still in pre-clinical stages, the company does have 4 clinical trials ongoing and a ‘strategic investment’ in a fifth trial with fellow pharma company Compass. The company’s clinical trials are looking at new drugs for a range of conditions, including general anxiety disorder, treatment resistant depression, opioid use, and schizophrenia-related cognitive impairment.

The most advanced product is RL-007, an orally dosed compound in clinical trials for the schizophrenic thought disorders. The drug has begun testing in a Phase 2a clinical study of safety and tolerability; tolerability is a major hurdle in the development of effective drugs for the treatment of schizophrenia. Topline results from the trial are expected late this year.

The second advanced pipeline project is the strategic investment with Compass, on the development of COMP360. This drug candidate is a synthetic psilocybin formula intended as a 5=HT2A-R agonist with oral indication as a fast-acting antidepressant for treatment resistant depression. The Phase 2b clinical trial completed dosing patients in June of this year, and topline results are expected before the end of 2021. The study has 233 patients enrolled, making it the largest-ever clinical trial of psilocybin.

Israel Englander and Millennium have been singing ATAI’s praises. In Q2, the hedge fund purchased 519,486 shares of ATAI, in a big show of confidence. Englander’s stake in the company is currently worth $8.73 million.

Backing his stance, Duncan writes: “ATAI had a productive 1H21, in our view, in which it IPO’d and bolstered its cash balance with validation from both institutional investors and strategic collaborators, to support itself and its subsidiaries through 2022, according to our model. Recall, a common de-risking denominator of the company’s pipeline is that every compound has some level of evidence of efficacy in human use, whether it is based on papers from the 1960s or use in other geographies. Yet in 2H21, though, we look forward to the company’s first data readouts in which we will be observing the efficacy of its compounds in randomized placebo-controlled trials for the first time.”

To this end, Duncan rates ATAI an Overweight (i.e. Buy), along with a $45 price target. Hitting Duncan’s target could yield returns of 166%.

Overall, the 11 recent reviews of this stock include 10 Buys and just 1 Hold, making the consensus view a Strong Buy. The shares have an average price target of $28, indicating room for ~66% upside from the current trading price of $16.90. (See ATAI stock analysis) 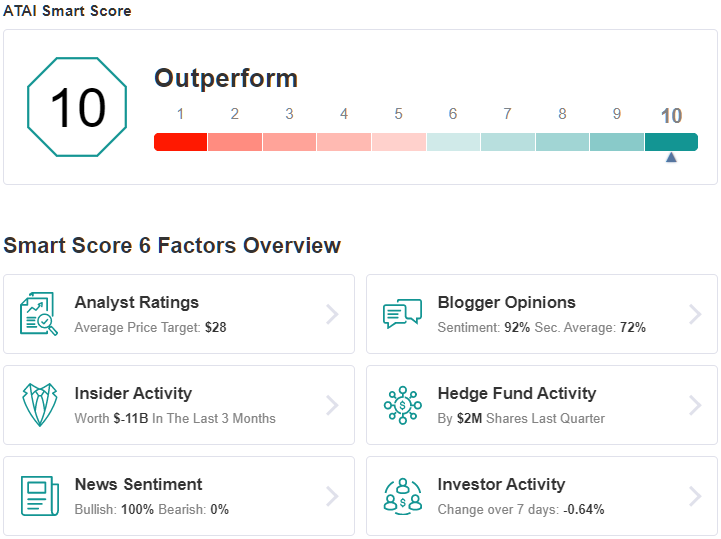 Next up we have Ovintiv (NYSE:), a major large-cap producer of oil and in the North American energy sector. The company’s core assets are in the Permian Basin of Texas, the nearby Anadarko Basin of Oklahoma, and the Montney play on the British Columbia/Alberta border in the Canadian Rockies. Ovintiv has secondary assets in the Bakken fields of North Dakota and in Utah’s Uinta Basin, in line with a strategic stance to back the main plays with quality secondary holding.

The quality of Ovintiv’s holdings can be judged by the company’s recent performance; since Q2 of 2020, Ovintiv has seen four consecutive quarterly revenue gains. The most recent quarterly report, for 2Q21, showed a top line of $2.49 billion, the highest in over two years. EPS came in a stiff loss, of 79 cents per common share.

Despite the EPS loss, management is confident. The company reported free cash flow generation of $350 million for the quarter and $890 million year-to-date, and stated that it had reduced net debt by $1.2 billion in the quarter, leaving $5.2 billion on the books. The company foresees hitting a $4.5 billion net debt target by year’s end.

Englander is among those that have been impressed by OVV. Reflecting a new position for the fund, Englander’s Millennium bought up 892,475 shares in Q2. The value of this holding? It lands at $25.3 million at current valuation.

The billionaire isn’t the only OVV fan. Writing for Cowen, analyst Gabe Daoud rates OVV an Outperform (i.e. Buy), and his $39 price target implies a one-year upside potential of ~38%.

“E&P equities remain FCF driven stories, and OVV stands out with best-in-class yield and ‘rate of change’ potential on RoC… The numbers are too compelling to ignore, in our view, as again we think OVV offers robust yield and will likely communicate incremental RoC in the months ahead… OVV is now a top pick,” Daoud opined.

This oil and gas player has no fewer than 15 recent stock reviews on file – and they break down 13 to 2 in favor of the Buys over the Holds for a Strong Buy consensus. The shares are priced at $28.26 and their $40.75 average target indicates room for ~44% upside in the coming year. (See OVV stock analysis) 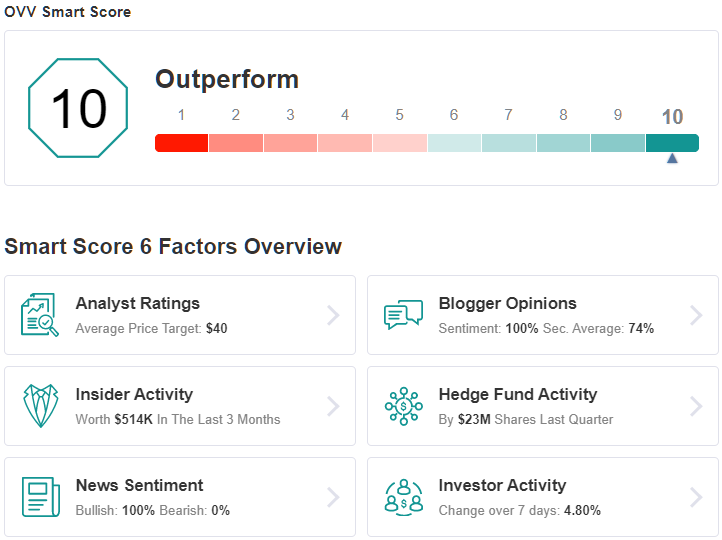 The last Englander pick we’re looking at is Graham Corporation (NYSE:), a maker of critical, highly engineered equipment – including custom ejectors, vacuum priming systems, surface condensers, and various turbomachinery solutions for transferring energy between fluids and rotors. The company handles the manufacturing process from design through the factory floor to delivery, and markets to the aerospace, chemical and petrochemical, defense, energy, and medical industries.

Graham’s fiscal year runs from April through March, putting the company well into fiscal 2022. In the full year fiscal 2021, which coincided with the worst of the COVID crisis, Graham reported total revenues of $97.48 million, up 7.5% from the $90.6 million reported in fiscal 2019, before the crisis began. Last month, the company reported results for fiscal 1Q22, with $20.2 million at the top line. This was up almost 21% year-over-year. Graham reported a $20.9 million increase in orders, along with a $235.9 million work order backlog; of that backlog, 80% is reported to be with the US defense industry.

During the quarter ending June 30, Graham made a major acquisition, of Barber-Nichols, an competing engineered equipment supplier to the defense and aerospace sectors. The transaction is worth some $70 million, paid out 87% in cash and the remaining 13% in stock.

During the month of August, Graham reported that it had been awarded over $20 million in new work orders for the quarter-do-date. The new orders came mainly in the defense and space industries, the energy field, and the chemical and petrochemical industries, but also included new work in advanced energy applications and HVAC.

In all of this, the company paid out its last dividend, in August, at 11 cents per common share. This was the ninth quarter in a row with the dividend at this level; the 44-cent annual payment gives a yield of 3.6%. Graham has a 12-year history of maintaining, and slowing growing, its dividend payment.

This background paints Graham as a growth-oriented mover in the high-end manufacturing field – and Englander clearly saw plenty to like as his firm picked up 157,512 shares for its opening position in GHM. This stake is currently worth $1.9 million.

Graham will be undergoing a change in leadership in the near-term, as CEO Jim Lines has retired and been replaced as President and CEO by Daniel Thoren. Colliers analyst Richard Ryan doesn’t see this as a problem, however, writing that the switch-over is not likely to impact the company’s activities.

“Management remains confident on its guidance for the full year. It will be a back-end loaded year, especially 4Q22 (March). FY22 is a transition year with Barber-Nichols only contributing for 10 months. Longer-term opportunities exist around two platforms – Defense/Space and Energy/Petrochemical. The former offers visibility into future naval programs (carriers and submarines) as well as new space programs. The latter is seeing opportunities in China and India, with domestic refining viewed as stable, and petrochemical applications emerging,” Ryan wrote.

These comments back up the analyst’s Buy rating, and his $20 price target suggests room for ~67% share growth over the next 12 months.

Graham has slipped under the radar somewhat, and only picked up 3 recent stock reviews. These all agree, however, that the shares are a Buying proposition, making the Strong Buy consensus rating unanimous. GHM is priced at $12, and its $21.33 average price target indicates it has potential for 75% upside this year. (See GHM stock analysis) 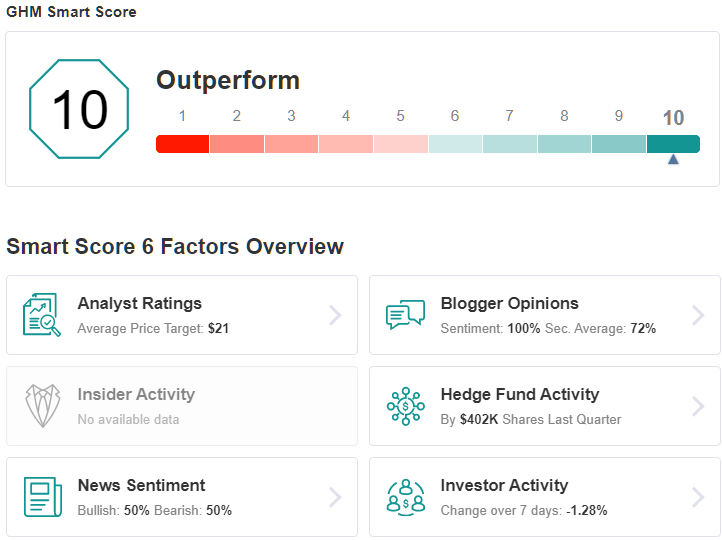