First of all, welcome back. Here’s hoping you had a great holiday season and feel ready for another exciting year of these fascinating financial markets.

The calendar is new, but the same old pandemic continues to cloud the economic outlook and, let’s face it, life as a whole. Last year may have been good for many investors, but it was tough for millions who lost jobs and battled illness during this tragedy. Let’s hope for better times ahead.

At least the market is consistent. It’s starting 2021 right where it finished 2020—on the upswing. That’s the case early Monday, anyway, but there’s a lot of unanswered questions going into the week and the year following double-digit Q4 gains for the major indices.

As 2021 gets under way, a key question is whether some of the trends that helped define last year’s market can spill over. For instance, there was a record boom in new public offerings, investor margin debt rose to an all-time high, and so-called “stay at home” stocks delivered amazing results. Meanwhile, the market spent most of November and December pricing in a pretty rosy 2021, partly based on vaccines. All these trends face question marks.

Right now there’s this great expectation. The downside—if you want to call it that—is can things really live up to what everyone is expecting? What happens to the overall market? How does the vaccine roll-out proceed after a slow start? Do investors keep their “risk-on” attitude that dominated late 2020? Can pandemic favorites like Peloton (NASDAQ:PTON) and Zoom (NASDAQ:ZM) (ZM) continue the growth they’ve had after the world returns to normal? These are among the questions facing investors as they return from their holiday break.

Wall Street kicks off 2021 with a familiar tone: Stocks climbed in pre-market trading, spurred on by firmness in Tesla (NASDAQ:TSLA) and Moderna (NASDAQ:MRNA) after TSLA reported nearly 500,000 deliveries last year and optimism grew about demand for MRNA’s vaccine.

November Long Gone, But Voting Back In Headlines

Those hoping to ease into the new year will likely be disappointed. The first week of 2021 looks busy on Wall Street, so if you plan on trading consider keeping close tabs on a bunch of data and geopolitical events coming down the pike. Buckle (NYSE:BKE) in.

First, there’s the Georgia runoff election tomorrow. This will determine who controls the Senate the next two years and potentially a lot of tax and regulatory initiatives. It could even help decide whether there’s another round of stimulus and how big it might be. As noted here last week, it’s possible stocks could suffer a post-holiday hangover if Democrats prevail, only because Wall Street tends to view Democratic control as more likely to bring higher taxes and regulation, though there’s no guarantee of either (see more below).

We’re also jumping right back into the data pool starting tomorrow with ISM manufacturing for December. The week wraps up with December nonfarm payrolls on Friday. Do you want the good news or bad news first? The good news is that analysts’ expectations for ISM look solid. The bad news is they think job creation took it on the chin in December.

Headline ISM manufacturing—a key metric that’s been on the upswing since mid-2020—is expected at 56.4% when the report comes out tomorrow morning, according to research firm Briefing.com. That’s down just a smidgen from 57.5% in November and would probably be viewed as market-neutral. Remember, anything above 50% is expansionary. New orders and order backlog were strong in November, so keep an eye on those numbers to see if the positive trends continued.

We’ll talk more about the payrolls report later this week so you can avoid potential sour news your first day back from the holiday. Let’s just say if analysts are right, it looks like it might be the weakest in eight months.

Good News May Be Built In To Some Extent

While job growth might be lagging, the stock market starts 2021 at valuations that look pretty high from a historic perspective. Major indices are way above their long-term moving averages and the S&P 500 Index trades at 22.5 times analysts’ average earnings estimates for 2021. Many big banks predict smaller gains in the major indices this year based on the fact that some of the anticipated better earnings and economic news might already be reflected in the market.

For now, a level to watch could be 3750 in the SPX. That had been technical resistance toward the end of 2020, and the market closed just above it to finish the old year. Any move below 3750 could conceivably generate some spillover selling, but closing above it could give the bulls more confidence.

In other corporate news, The Wall Street Journal reported that Roku (NASDAQ:ROKU) is in talks to buy the rights to content from streaming service Quibi. This news seems to be giving ROKU shares some momentum early Monday. 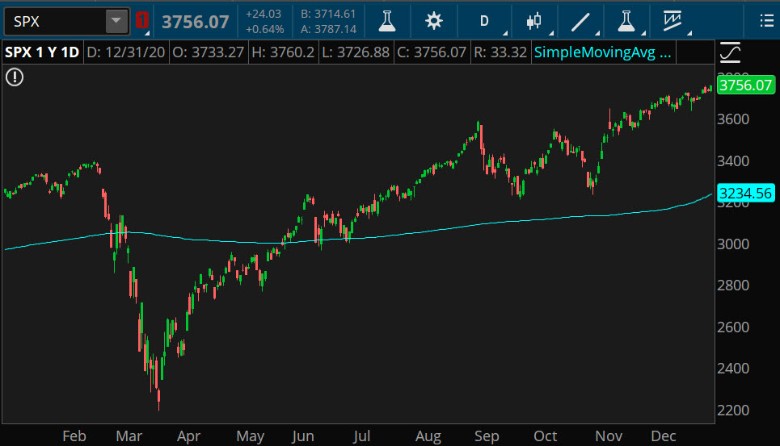 CHART OF THE DAY: WORKING ABOVE THE NET. The S&P 500 Index (SPX—candlestick) climbed above its 200-day moving average (blue line) last June and hasn’t really looked back. Its current 16% premium to the closely watched 200-day MA has some analysts worried about possible overbought conditions, but others say low interest rates and hopes of an economic revival later this year could justify high prices. Data Source: S&P Dow Jones Indices. Chart source: The thinkorswim® platform from TD Ameritrade (NASDAQ:AMTD). For illustrative purposes only. Past performance does not guarantee future results.

Be Prepared—Volatility Often Perks Up Early in Year: Volatility slipped on Wall Street toward late December, with the Cboe Volatility Index (VIX) slipping to near its post-pandemic lows. That might not last. At some point we’re likely going to start to have volatility again related to COVID-19. This is not a story that’s necessarily going away in the first six months of 2021. Especially considering the record hospitalizations being recorded and this new strain of the virus that’s been making headlines. If there’s any stumbles on vaccine logistics, volatility could go up even more.

In fact, in recent years, volatility has often climbed in late January and early February after a slow start. This was true even before the pandemic. Look at what happened in 2018 and 2020, when VIX soared at that time of year. Past events don’t guarantee the future, but it’s worth noting this emerging seasonal trend. VIX ticked up slightly Monday to start the year.

Gridlock Threatened: In a normal year, election drama would be way behind us by now. Of course, 2020 was anything but normal, so Georgia voters go to the polls in two Senate races tomorrow. Nearly two months ago—after the election resulted in split control of Washington— we wrote about how gridlock can often be beneficial for stocks, especially sectors where a divided government might not get much done. Keeping current levels of regulation and market-favorable tax laws stood to possibly benefit certain sectors like Health Care, Energy, and Financials, as well as help investors who wouldn’t necessarily have to worry about higher capital gains taxes.

Tomorrow’s election potentially puts gridlock at risk. Though this isn’t a political column, it wouldn’t be prudent (as one recent U.S. president liked to say) to ignore the voting. A sweep by the two Democrats would mean Democratic control of the Senate, House and White House. No matter what your politics, it’s hard to deny that historically having Democrats in control has often led to more regulation and higher taxes (the 2009–2010 Democratic Congress passed numerous bank laws and the Affordable Care Act, all signed by Democratic President Obama, and Democrats raised gasoline and corporate taxes when they controlled Congress and the presidency back in 1993).

Hard Act To Follow: If you’d told the average investor back in late March that all the major indices would forge new highs by year-end—including 40% gains for the NASDAQ Composite—he or she might have scratched their head about your sanity. But here we are, and a lot of people are looking back at 2020 and wondering how the market could have set records with so much suffering and hardship in the economy.

One lesson learned is that Wall Street just isn’t reflecting main street. The stock market usually reflects what investors collectively think will happen in the long run, not right now. That’s why it can be confusing to see stock indices run up big gains at times like these. The other lesson is that there is no “main street” stock market. Consider this: The companies that enjoyed some of the biggest gains this year weren’t “mom and pop” businesses. They were the “mega-caps” like Apple (NASDAQ:AAPL), Walmart (NYSE:WMT) and Amazon (NASDAQ:), which were already enormous businesses before the pandemic. That’s what the stock market tends to reflect. Like it or not, the path these companies and others like them take from here is likely to help define 2021 on Wall Street, whatever happens on “main street.”